Staff Sgt. Patricia King has been proud to deploy downrange three times in her 18-year Army career. But she may... 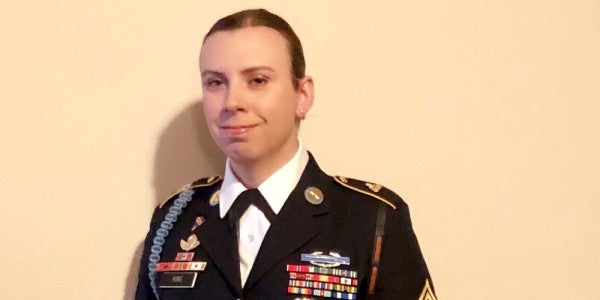 Staff Sgt. Patricia King has been proud to deploy downrange three times in her 18-year Army career. But she may have to resign without retirement benefits if President Trump re-imposes a ban on transgender troops serving in the military.

King began her transition from male to female in November 2015. Prior to that, she deployed three times to Afghanistan – during her first, she took part in Operation Anaconda as a squad automatic weapon gunner with the 10th Mountain Division – and once to Kuwait, she said.

On Friday, Defense Secretary James Mattis made his recommendation to President Trump about whether to allow transgender service members to stay in the military. The Washington Post reported on Thursday that Mattis was expected to recommend that transgender troops be allowed to stay in the military, but a Pentagon refused could neither confirm the story was accurate nor indicate what Mattis’ recommendation is.

One argument in favor of not allowing transgender troops to serve is that their medical needs make them non-deployable. But King said there have been only “nominal periods of time” that she could not deploy due to follow-up surgeries and she has managed to schedule most of those procedures around Christmas and summer leave.

“I am 100 percent deployable,” King said. “My readiness has always been my top priority. Selfless service is one of our core Army values. I had a surgery in November and I climbed a mountain last weekend.”

The Defense Department does not track how many transgender troops are in the military, according to the Pentagon. Service members are listed as either male or female.

A transgender Marine told Task & Purpose that his chain of command has provided him with amazing support, but he wants people to stop fixating on his gender.

“I want my career and character to speak to the kind of person I am and what I can achieve, not be limited by someone’s ill-informed personal opinion of my impact,” said the Marine, who asked that his name not be used out of concern of possible retaliation.

“They have already put me in a box and defined me as mentally ill or incapable of honorably serving,” the Marine added. “I can tell you that me being trans has nothing to do with my morals or ethics, and yet I have been reduced to nothing but what they already assume of me.”