Junior leaders have long complained that it has become increasingly difficult to prepare new infantry soldiers for deployment. Now the... 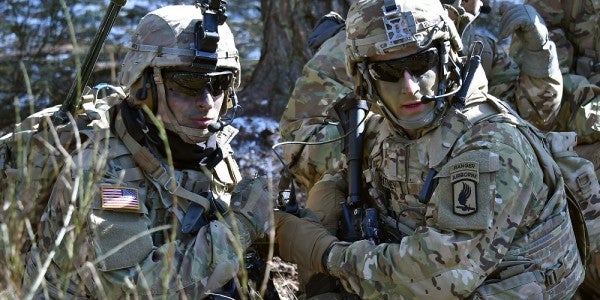 Junior leaders have long complained that it has become increasingly difficult to prepare new infantry soldiers for deployment. Now the Army is making sure that soldiers are in better shape and more disciplined by the time they arrive at their first infantry units.

The Army has essentially been training infantry soldiers the same way for the past 42 years, but now soldiers have to be ready to go into combat when they finish their infantry training,Voorhies told Task & Purpose. Newly minted infantry soldiers could join units that are about to deploy to Europe, Asia, or Afghanistan.

“The longstanding assumption has always been: Get the civilians the amount of training required to be familiar with the basics,” Voorhies said. “Their first-unit assignment will train them up; we will have time before we go to combat; we will have to time before we have to deploy soldiers and put them in harm’s way.”

Infantry-OSUT is currently 14 weeks long, during which recruits go through basic and advanced individual training in one time period. The pilot program is the first step in expanding the training cycle to 22 weeks for all infantry recruits starting in the fall of 2020, Voorhies said.

The extra eight weeks of training will serve as a “red shirt program for infantry soldiers,” to make them experts at basic infantry tasks, he said. Soldiers will get “more sets and reps” on individual movement techniques, use of terrain, and battle drills to prepare them to learn tactical maneuver later.

Right now, infantry recruits only get one day of training on land navigation, but the extra time will allow the Army to test recruits individually on their ability to use a map and compass at day and night, Voorhies said. Recruits will also be able to train as nine-soldier squads instead of pairs on the live-fire range.

Related: So Long, 5.56: The Army Is Testing A Bigger Bullet For Its SAW And Carbine Replacements »

For years, infantry units have said that Army recruits need to be better prepared both physically and mentally by the time they join the operational forces, according to Voorhies.

“Every year, a survey is done by FORSCOM [U.S. Army Forces Command] units, kind of grading the product which we give them,” he told Task & Purpose. “Articulated clearly and over time has been: Better marksmanship; more PT is needed; more discipline is needed.”

One way the Army hopes to develop self-discipline in recruits is the return of certain privileges toward the end of training, such as giving them their cell phones back, he said. That way, they can also learn self-control when it comes to how cell phones can reveal their positions to the enemy.

“I don’t know about you, but if you’re kept in a penal colony for a certain period of time then let loose on the world, I don’t know how well you’re going to have some self-discipline to comport yourself,” Voorhies said. “In order to better assimilate these kids into their first unit of assignment: Start treating them like soldiers. If you treat someone like furniture for 14 weeks, what is your expectation of the result with respect to discipline?”

The added training, Voorhies said, reflects a change in the Army’s mindset to focus on preparing soldiers to fight counterinsurgency campaigns with the understanding that their squad leaders will teach them the other combat skills they need to know later.