Army Chief Tells Soldiers To Get Fit Or Get Out

WASHINGTON — While the Army’s new gender- and age-neutral combat fitness test is hard, soldiers should have time to train... 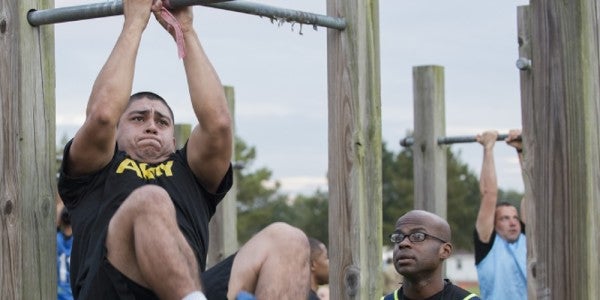 WASHINGTON — While the Army’s new gender- and age-neutral combat fitness test is hard, soldiers should have time to train for it before it becomes mandatory on Oct. 1, 2020, Chief of Staff Gen. Mark Milley said Monday.

“If you can’t get in shape in 24 months, then maybe you should hit the road,” Milley said at the Association of the United States Army’s annual conference in Washington, D.C. “Maybe you should consider an alternative to this.”

During the 50-minute test, soldiers must complete a strength deadlift; throw a medicine ball over their head; do a set of pushups, during which they lift their hands off the ground after each pushup; complete a 250-meter “sprint, drag, carry” event; and finally run 2 miles. The Army is refining the standards for each event, which are based on whether a soldier’s military occupational specialty involves a “moderate,” “significant,” or “heavy” amount of physical exertion.

Related: Could This Reporter Survive The Army Combat Fitness Test?»

Task & Purpose asked Milley on Monday if the Army could end up losing older soldiers, who are unable to perform as well as younger ones on the combat fitness test.

Many of the first soldiers sent to the Korean peninsula in 1950 were not physically prepared to fight a war in the hilly terrain, leading “countless numbers” of them to be killed as a result, Milley said.

The new combat fitness test more closely mirrors the physical activities that soldiers will have to perform in combat than the Army’s current PT test, he said.

“This has everything to do with effectiveness in combat — that’s why it’s gender-neutral; that’s why it’s age-neutral,” Milley said. “Combat is unforgiving. It doesn’t matter how old you are. The enemy doesn’t care. Before they shoot you, they don’t say: ‘Hey are you 25 or are you 45?’ They don’t do that. They just shoot you. And dead is dead. So we want to make sure that our soldiers are in top physical condition to withstand the rigors of ground combat.

“And there’s nothing like it. Ground combat is unbelievable. Go look at those kids, who are walking up and down the hills of Afghanistan. My dad at the beaches of Iwo Jima went 19 consecutive days without eating in some of the most brutal combat in military history. Combat is not for the faint of heart. It’s not for the weak-kneed.”

While the combat fitness test represents “a bit of a culture shock” for the Army that is sure to draw plenty of complaints, Milley said he expects the vast majority of soldiers to rise to the challenge.