The latest assessment of JLTV the Pentagon's operational testing and evaluation arm released on Thursday indicates that the Army's current vehicles "are not operationally suitable because of deficiencies in reliability, maintainability, training, manuals, crew situational awareness, and safety" 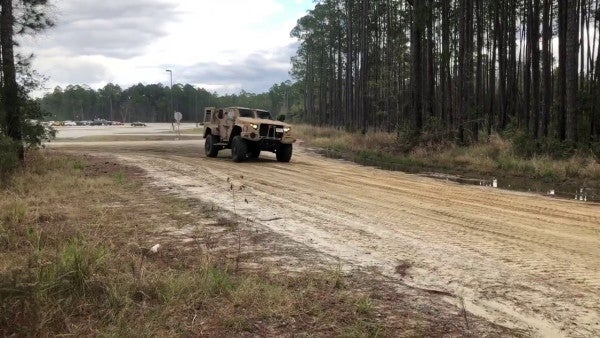 The Army's newly-fielded Joint Light Tactical Vehicle was supposed to be a worthy successor to the Humvees that so many veterans derided as “death traps” during the Global War on Terror, an up-armored modular infantry vehicle bristling with weapons.

But according to a Pentagon report, the new vehicles may prove as much of a headache for soldiers than vehicle it sought to replace.

The latest assessment of JLTV the Pentagon's operational testing and evaluation arm released on Thursday indicates that the Army's current vehicles “are not operationally suitable because of deficiencies in reliability, maintainability, training, manuals, crew situational awareness, and safety.”

The reliability issues seem relatively pedestrian, ranging from flat tired to faulty engine wiring. But those issues could prove especially problematic during operations downrange for a simple reason: units “cannot maintain the JLTV without support from the contractor field service representatives due to vehicle complexity, ineffective training, poor manuals, and challenges with troubleshooting the vehicle.”

Translation: Nobody knows how the fix the damn things except for Oshkosh customer service reps.

As result, the JLTV “will require more maintenance that the [Humvee] based on the maintenance ratio demonstrated in the MOT&E,” per the Pentagon evaluation — a troubling revelation given that the JLTV was purportedly designed to not only withstand the IED attacks that proved problematic for the Humvee, but also do to so with less time in the garage.

This isn't to say that the JLTV is a complete disaster. The Pentagon evaluation concluded that the JLTVs are overall “operationally effective” for combat and tactical missions, providing sufficient capabilities for tactical mobility over complex terrain and delivering both lethal and suppressive fire against enemy targets. But the maintenance issues may end up crimping how many of the vehicles are actually available for such operations.

It's unclear how these maintenance issues have played out with the first batch of JLTVs the Army began fielding earlier this year. A spokesman for the 1st Armored Brigade Combat Team, 3rd Infantry Division at Fort Stewart in Georgia that received (and already broke) the first of its 500 JLTVs on Jan. 14 told Task & Purpose that the vehicles are only now fielding to the battalion level.

But one thing is clear, though: If you're rolling into combat, the last thing you're going to want is to call a customer service rep to make on-the-fly repairs.