The Army’s new body armor and combat helmet are here. Here’s who will get them first

After years in development, the Army will field its brand new body armor, combat helmet, and protective gear to soldiers... 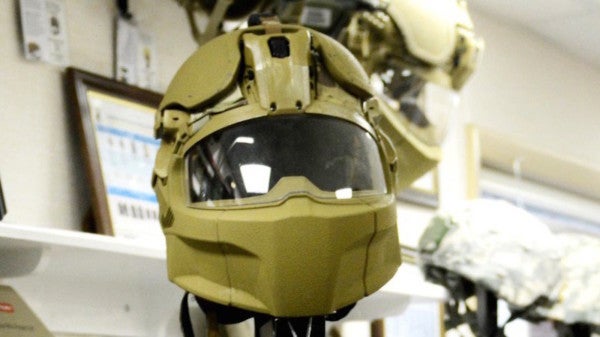 In addition, 3rd BCT soldiers are picking up the Modular Scalable Vest version II and Ballistic Pelvic Protection, as well as new eyewear with transition lenses, Col. Stephen Thomas told Army Times. The MSV is part of the Soldier Protection System and is the Army's next-generation Personal Protective Equipment system.

These details were revealed to reporters in attendance at a Monday ceremony at Fort Belvoir for Staff Sgt. Steven McQueen to celebrate the ECH that deflected a head shot from a 7.62mm round during an insider attack in Afghanistan last September.

Apart from less weight and more protection to the 3.3-pound ECH, the IHPS offers removable rail mounts to rock both optional protective add-ons — including a motorcycle-style “mandible” — and interface with the Army's new upgraded Enhanced Night Vision Goggles-Binocular family of devices that are just over the horizon for soldiers.

The new protective best weighs in at 25 pounds when fully equipped with front and side body armor plates, five pounds less than the current Improved Outer Tactical Vest and a major boon for close-combat units given the burden of excess weight during a firefight.

All of these new pieces of protective gear have undergone extensivetesting among Army units over the last several year, all part of the Army efforts reconcile a need for improved body armor load weights with efforts to reduce traumatic brain injuries. Time, and the efforts of the 3rd BCT, will tell whether those efforts paid off or not.

SEE ALSO: The Army's Body Armor May Be Too Heavy For Soldiers In Combat, Report Finds