Fifteen pounds. That seems to be what separates a high-performing Marine from eventually becoming a combat casualty, according to new... 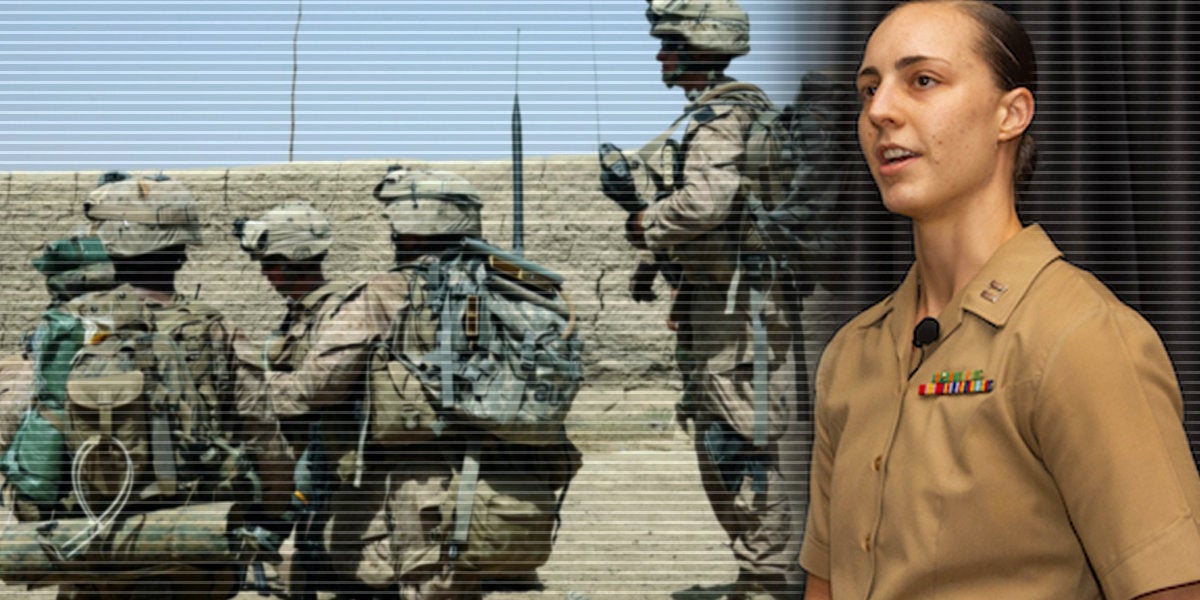 That seems to be what separates a high-performing Marine from eventually becoming a combat casualty, according to new research carried out by a Marine captain at the Naval Postgraduate School.

In her award-winning master’s thesis, titled Paying For Weight In Blood: An Analysis of Weight and Protection Level of a Combat Load During Tactical Operations, Capt. Courtney Thompson argues that being able to move faster is more important against near-peer enemies in combat, and the all-too-common trend of burdening troops with heavier loads can lead to an increase in casualties.

“I was pretty shocked that 15 pounds of gear on top of 43 pounds of gear was already enough,” said Thompson, referencing the typical 43-pound fighting load of flak jacket, kevlar helmet, and other personal protective gear.

Thompson, a combat engineer, based her research off a variety of data, including an Australian study that looked into the effects of combat loads on physical mobility, historical research, and a Government Accountability Office report, which found that the average ground combat soldier or Marine in 2016 was typically carrying a staggering 120 pounds of gear.

She also plugged data into a computer simulation pitting a 13-Marine rifle squad against a small insurgent force armed with AK-47 rifles. After factoring in individual weapons, physical fitness levels, marksmanship, and the squad member’s billet, she found that troops fighting under heavier loads were more likely to become casualties, while Marines that were able to move faster — and thus, were harder to hit — brought about a 60% reduction in casualties.

To put it in grunt-speak: ounces equal pounds, and pounds equal pain. And Thompson, for her part, figured out just how much pain can come as leaders add more gear to the packing list.

“It’s a problem that we’ve had for a long time, and the trend that we’re seeing is getting worse, not better,” Thompson told Task & Purpose.

Historically, the recommended weight for ground combat troops hasn’t changed all that much since the 19th century. A study in the late 1800s recommended a fighting load of 48 pounds. By 2007 the U.S. Naval Research Advisory Committee said it should be 50.

But those weights have been brushed aside in favor of more protective equipment, weaponry, and other gear. Nowadays, a typical Marine or Army rifleman can carry anywhere from 90 pounds in combat while machine gunners and javelin gunners are sometimes saddled with nearly 160 pounds.

“If we keep going on this trend, you’re going to get to a point where people just can’t lift the weight,” Thompson said.

Although Thompson doesn’t expect the Marine Corps to suddenly tell all its grunts to drop their packs and rejoice, she does think that offering up hard data on how weight can influence combat effectiveness will give senior leaders more information to make better decisions.

For example, if intelligence reporting shows a small force of enemy fighters have AK-47s and the chances for explosive devices are low, the data shows it’s better to have troops outfitted with Level III armor, instead of outfitting them with the additional weight that comes with Level IV.

“What these results are showing is that a balance of weight and protection is best,” Thompson said. “It’s not going to give you any more protection, and those extra pounds you don’t need to carry.”

Her analysis found that most Marines would perform best with a fighting load of 50 pounds or less and an assault load of 75 pounds or less. Percentage-wise, most can effectively carry 30% of their body weight as a fighting load, or 45% for the assault load. Additional weight, Thompson argues, is where the data shows a “statistically significant detriment” to combat effectiveness.

You can view the PowerPoint presentation on her thesis below:

Analysis
Branch
Marine Corps
Tactics
are you sure you want to pack all this?
ground combat
health & fitness
research
soldiers