The Pentagon Wants To Send Thousands More Troops Back to Afghanistan

The Department of Defense will ask the White House to order the deployment of between 3,000 and 5,000 more U.S.... 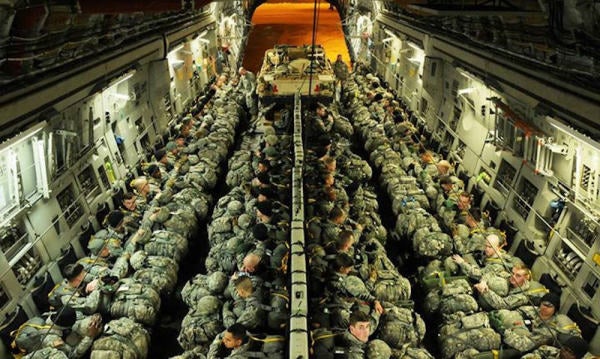 The Department of Defense will ask the White House to order the deployment of between 3,000 and 5,000 more U.S. troops to Afghanistan to help break the “stalemate” with Taliban forces, officials told Congress on Thursday.

In a hearing before the Senate Armed Services Committee, officials said the deployment, consisting primarily of special operations personnel, would be tasked with advising and training Afghan security forces and bolstering the war-weary central government for continued counterterrorism efforts, CNN reports.

The primary goal of the deployment is “to move beyond the stalemate and also to recognize that Afghanistan is a very important partner for the United States in a very tricky region,” Acting Assistant Secretary of Defense for Special Operations Theresa Whelan told lawmakers. “We want to maintain that partnership with Afghanistan and we want to ensure that Afghanistan reaches its potential, so that's the objective of the strategy.

Of the 13,300 troops currently fighting the Taliban in Afghanistan as part of the U.S.-led coalition, more than 8,400 are American.

The news comes on the heels of an unannounced visit by Defense Secretary James Mattis to Kabul late last month, to meet with top Afghan lawmakers and assess the Pentagon’s role in finally ending the 16-year-old war. The week before, National Security Adviser Lt. Gen. H.R. McMaster had surprised both Afghan and American officials in Kabul by showing up without warning.

“We are under no illusions about the challenges associated with this mission,” Mattis said in Kabul. “2017’s going to be another tough year for the valiant Afghan security forces and the international troops who have stood and will continue to stand shoulder-to-shoulder with Afghanistan against terrorism and against those who seek to undermine the legitimate, United Nations-recognized government of this nation.”

Whelan’s choice of words is significant. In February, Army Gen. John W. Nicholson declared the battle against the Taliban and other jihadi groups in Afghanistan a “stalemate” in his own sobering SASC testimony, telling Congress he likely needed “a few thousand” additional troops to shore up Afghan security forces and rebuff the Taliban.

It’s not hard to understand their thinking. After 16 years of war (and a five-year “withdrawal” of U.S. forces), fatalities among security forces and casualties among civilians in Afghanistan are at record levels. Just before Mattis’ visit to Kabul in April, a five-hour-long suicide bombing and siege on a base left 40 Afghan troops killed and 150 wounded.

Leaning on SOCOM to steel Afghan security forces for a violent future may not be sustainable, however. While violent extremism remains a chief priority for U.S. Special Operation Command, Whelan told the SASC that growing commitments to threats like Russia, North Korea and China are stretching SOCOM’s 8,000-strong force thing.

“I think the concerns that we have mostly are in readiness across the force,” Whelan said. “We’ve been operating at such a high tempo for the last decade plus, and with budgets going down, what we’ve had to do is essentially … eat our young, so to speak.”