Mattis In Kabul: It’s ‘Going To Be Another Tough Year’ For US Troops In Afghanistan

Secretary of Defense James Mattis has made an unannounced visit to Afghanistan to meet with U.S. military commanders and Afghan... 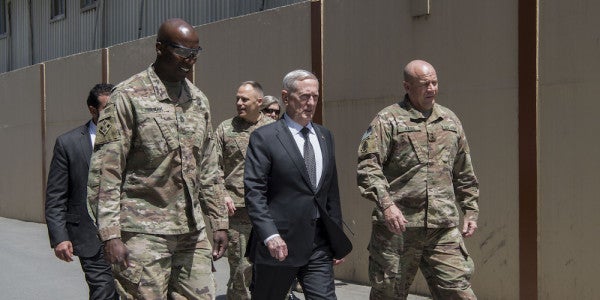 Secretary of Defense James Mattis has made an unannounced visit to Afghanistan to meet with U.S. military commanders and Afghan officials and reassess the Pentagon’s role in bringing the 16-year-old conflict to a permanent close, NBC News reports.

Speaking in a press conference in Kabul, Mattis said the administration of President Donald Trump is under “no allusions about the challenges associated with this mission.”

“2017’s going to be another tough year for the valiant Afghan security forces and the international troops who have stood and will continue to stand shoulder-to-shoulder with Afghanistan against terrorism and against those who seek to undermine the legitimate, United Nations-recognized government of this nation,” Mattis said.

Surprisingly, Mattis appeared to extend something of an olive branch to the Taliban fighters who have plagued the country for decades.

“If the Taliban want to join the political process and work honestly for a positive future for the Afghan people who have suffered long and hard, they need only to renounce violence and reject terrorism,” said Mattis. “That’s a pretty low standard.”

Mattis’ proposal of peace negotiations isn’t unprecedented. In 2015, the DoD’s Enhancing Security and Stability in Afghanistan concluded that, after years of seemingly intractable conflict, “the best way to ensure lasting peace and security in Afghanistan is reconciliation and a political settlement with the Taliban.”

But Mattis’ surprise arrival in Kabul — tacked on to the end of a multi-country trip to the Middle East designed to “reaffirm key U.S. military alliances, engage with strategic partners in the Middle East and Africa, and discuss cooperative efforts to counter destabilizing activities and defeat extremist terror organizations” — reflects an aura of uncertainty surrounding the Trump administration’s approach to war.

Both visits came after Army Gen. John W. Nicholson, the commander of the U.S.-led coalition in the country, declared the battle against the Taliban and other Islamic terror groups in the country a “stalemate” in sobering testimony before the Senate Armed Services Committee in February.

In the same hearing, Nicholson told Congress that he needed “a few thousand” additional troops to advise and train Afghan security forces and rebuff the Taliban forces who have reclaimed key districts across the war-torn country in recent months. (Of the 13,300 troops beating back the Taliban as part of the U.S.-led coalition, some 8,400 are American, according to New York Times).

Mattis’ arrival in Kabul came with an ominous start. In the early hours of Monday, Taliban insurgents detonated a car bomb at the entrance of Camp Chapman in the country’s Khost province, the same base targeted in a brutal suicide attack in 2009 that left nine people dead, including seven American CIA officers and contractors.

Monday’s attack came three days after Taliban fighters, disguised in military uniforms, slaughtered 140 Afghan soldiers in what has been described as the single deadliest attack on an Afghan military base since the U.S.-led coalition invaded the country in 2001. The country’s Afghan minister of defense and the army chief of staff both resigned in the aftermath of the attack.