It’s often said that if we don’t study our own history, we will be doomed to repeat it. This is... 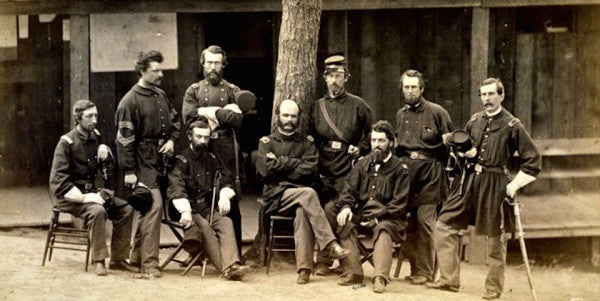 It’s often said that if we don’t study our own history, we will be doomed to repeat it. This is probably true, mainly because we can learn great lessons from it and use them in our own lives to grow. Twenty years in uniform taught me a great deal; there’s very little substitute for on-the-job training and experience to help with personal or professional growth, but about halfway through my career, I started asking questions that transcended what was happening to me day to day. How did we get here? Who came before me? Professional Military Education revealed some things, but it always felt distant and watered down. What if I dug deeper? What could I glean from learning the politics and individual experiences of the soldier on the ground? Could I apply it?

I started reading. A lot. Here are a couple things military history has shown me:

American ideals were the first to stand for true human freedom.

Since our nation’s birth, American troops have been the only people on earth who have consistently deployed, fought, and died for the ideals that define and exemplify freedom. Liberty, protecting our homeland, and our way of life have nearly always been foremost in the minds of the American soldier — more so than our counterparts from other lands. The U.S. military has been a force for freedom since it’s inception.

Related: Here are the women who first joined each branch of the military.

The American Revolution defeated the forces of tyrannical British rule against all odds. Four score and seven years later, a brutal and tragic Civil War between our states was still a conflict that was undertaken for freedom. A northern soldier would have said, “We’re fighting to preserve the Union and freedom for ALL people.” A southerner might have said, “We’re fighting to protect our lands from tyranny.” As fraught with flaws as each statement might be, these beliefs still went back to a basic commitment to liberty.

World War II was one of the most cataclysmic conflicts in human history, yet it was the classic tale of good versus evil: Americans sided with good, and millions across the globe were liberated as a result. And while Korea, Vietnam, and the Global War on Terror have been called controversial, at their cores, they all aimed to eradicate threats to freedom.

Contrast this with other military forces across history, and you’ll find many were used for purposes that were at best nefarious, and at worst, tyrannical and evil. Even today, military service is often obtained through conscription in other countries. Not so in the United States, where we are not usually at a shortage for people with a strong desire to put the uniform on. Unlike many nations, the United States maintains a force of volunteers; we all decided to serve. Nobody forced us.

American vets who came before this generation endured more hardship than us.

Uniformed Americans have always served the cause of freedom. But those that came before us endured far more hardship standing up for it than most today could ever hope to understand. The development of some of the comforts we enjoy in our contemporary combat zones is a very new thing in historical terms.

By the winter of 1777, George Washington’s Continental Army had been getting its ass handed to it by the Redcoats. If that wasn’t bad enough, more than 2,000 of his ill-equipped forces died in the brutal cold that followed during their encampment at Valley Forge, Pennsylvania. About 150 years later, soldiers suffered similarly in places like Bastogne, Belgium, or during the first winter of the Korean War. They were ill-equipped, underfed, and their morale suffered.

A quick study of the Civil War will reveal its unimaginable brutality: over 620,000 soldiers died. That was nearly 3% of the population of the United States at that time — numbers we can’t even fathom today, even when talking about the atomic bombs dropped on Hiroshima and Nagasaki in 1945, which killed far fewer people.

Conflicts in Korea and Vietnam all saw their share of soldierly privation as well. Now contrast this with modern military deployments. Most of us who have served in combat zones have certainly endured hardship, but compared to our history it’s often been short-lived. We are well-fed, better equipped than any of our predecessors, and we can even log on to the internet and talk to our spouses and kids — the U.S. soldier of yesterday only had the mail to rely on. If they were lucky, it got through in weeks or months, and their separations from loved ones usually lasted much longer than we’re used to. History shows us that American vets who came before you and me had it far worse, and for that we owe them our respect and thanks.

American service members are (and have historically been) political tools.

Sound cynical? It is. It’s also true. The soldier generally serves with the greater good in mind. Subject to myriad pressures of every kind, our political decision makers may try to do the same, but it has come off poorly on most occasions. Americans have died needlessly in the resultant military blunders, and wars have been all but lost — Vietnam being the most glaring example. Poor political management and needless death — not to mention frustrated military members — are the most common consequence. Like it or not, we are pawns in the big political game, and this can be frustrating.

Serving in uniform means a lot of good things for veterans, but it can also mean being victim to missteps. It could be a tactical/operational one (such as the 14 suicidal assaults by Gen. Ambrose Burnside at Fredericksburg in 1862, which caused nearly 8,000 casualties), or the strategic one (like defeat in Vietnam at the hands of the communists, and some may argue, present-day Iraq at the hands of ISIS). It may also mean frustration with policy, which often springs from social demands. In the Civil War, many whites (including soldiers) felt disdain for all-black northern infantry units. After World War II, many soldiers were similarly frustrated with the thought of integrating African-Americans into the military. Today, it might be the modern issues of women in frontline combat or openly homosexual service members. In the end, the military servant doesn’t control much after he or she has signed on the dotted line. Our opinion usually amounts to very little, and a study of American military history teaches us that some things don’t change. The G.I. doesn’t always make the decision, and when we serve, we leave our opinions and prejudices at the door. That’s the ways it is, and it’s one thing that has never changed.

Aside from putting the practices of leadership figures like Lincoln, Lee, Patton or Schwarzkopf into use, I’ve found the lessons from military history aren’t always easy to apply. They can, however, create appreciation for tradition and can illustrate that some things change and others don’t. A good military leader can use this to learn and teach leadership, provide guidance, or even become a better parent.

This merely scratches the surface. Our military history is rich, and we need to maintain the traditions that define each of our services and our country. If we can’t realize the mistakes and successes of those that came before us, we may make the same ones again. It is incumbent on all of us to learn, study, and grow from our past if our nation is ever to remain the unique beacon of freedom we’ve been for nearly 250 years.