The solemn remembrance of the 100th anniversary of World War I began last August in Europe. Dignitaries met and laid... 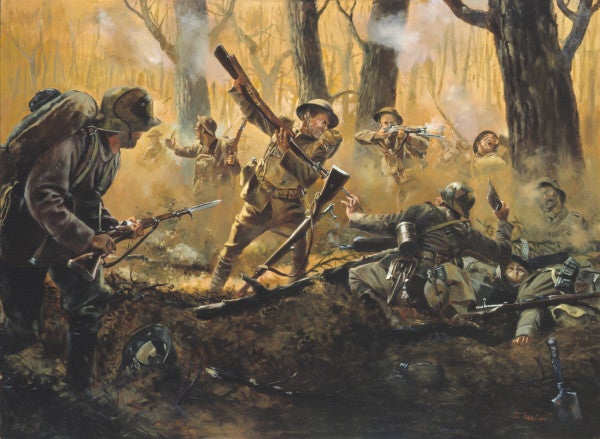 The solemn remembrance of the 100th anniversary of World War I began last August in Europe. Dignitaries met and laid wreaths at national monuments and cemeteries; theTower of London was surrounded by 888,246 ceramic poppies, commemorating each British soldier to die in the war.

The Great War, as it is often called,stands starkly in European memory. Small monuments to the dead can be found in almost every single European town and city. They are usually very plain and simple, not ornate, as memorials of past wars often were. For Europe, World War I was a traumatic event that ripped whole societies apart. An entire generation of young men vanished in the horrors of the battlefield, falling to disease, poison gas, machine gun bullets, and artillery shells. The very first “modern war” persisted on for four brutal years, from 1914 to 1918, claiming over eight million lives. It is therefore easy to see why the centennial ceremonies are somber rather than celebratory.

While World War I looms large in European memory, it usually merits only a few scant pages in American history textbooks. In the United States, World War I is only “another war we won” and is often seen as a prelude to World War II. U.S. involvement in the war lasted just over a year, from 1917 to 1918, with the majority of fighting in the spring, summer, and fall of 1918. Although quite a few towns have World War I monuments, most people cannot name World War I campaigns and battles, let alone why and when U.S. service members fought overseas.

Over 53,000 U.S. personnel died in battle in World War I, while another 63,000 died of disease and other causes. For only one year of military involvement, these statistics are shocking and drive home why the centennial of the war needs to be remembered in the U.S.

Far from being a minor event in American history, World War I was a watershed event for the nation in many regards. One, it dragged America out of isolationism. Ever since the founding of the nation, Americans were reluctant to get involved in European affairs. Much of this sentiment came fromGeorge Washington’s Farewell Address, where he said,

It is our true policy to steer clear of permanent alliances with any portion of the foreign world; so far, I mean, as we are now at liberty to do it; for let me not be understood as capable of patronizing infidelity to existing engagements. I hold the maxim no less applicable to public than to private affairs, that honesty is always the best policy. I repeat it, therefore, let those engagements be observed in their genuine sense. But, in my opinion, it is unnecessary and would be unwise to extend them.

This became national policy through the 19th century, although it was acceptable practice for the U.S. to intervene in affairs in North, South, and Central America. Although by 1914 the U.S. controlled its own territories in the Pacific (the Philippines and the Virgin Islands), there was great reluctance to get involved in the conflict in Europe. However, through French and British diplomacy, as well as fears that Germany was going to invade Mexico and attack the U.S. from the south, public opinion slowly grew for greater intervention in Europe. When a German submarine sank the civilian ocean linerRMS Lusitania in 1915 killing more than 120 Americans, public opinion toward Germany soured even more. Continued submarine warfare against neutral vessels proved the last straw, and the U.S. entered the war against Germany and her allies on Jan. 31, 1917.

With war declared, and America committed, preparations began for the first troops to go to France. World War I was the first war in which millions of American service members were mobilized, trained, equipped, and sent overseas to a foreign continent. Regular Army and National Guard divisions began arriving in 1917, and more divisions followed all through 1918. By the end of the war, over four million Americans were in uniform, more than at any previous point in our nation’s history. Every family at home sent members or friends off to foreign battlefields that they had never heard of before. It proved that the National Guard could mobilize quickly and fight on the front lines with regular Army troops. Because National Guard units were community organizations, it brought the war home to small towns across America like never before.

Far from home, U.S. troops fought on the front lines alongside war-weary allies who were astonished at the vigor and tenacity that U.S. service members brought with them. The U.S. commitment to the war broke the back of German resistance and brought the belligerent nations to the peace treaty table by November 1918. Americans quickly madenames for themselves at places like Cambrai, Cantigny, Château-Thierry, Belleau Wood, St. Mihiel, and Meuse-Argonne. Americans fought, bled, and died for yards in horrific fighting. During the Champagne-Marne Offensive in July 1918, National Guard troops from New England occupied the site of Belleau Wood, where U.S. Marines had gained renown the month prior. Attempting to dig entrenchments, the New Englanders were shocked to discover that not a single foot of ground could be excavated without revealing shallow-buried bodies from the previous month’s fighting. Troops endured near-constant bombardment by heavy artillery and poison gas. Their war was truly hellish.

When the troops came home, they were greeted by cheering crowds and parades in every city and town across the nation. It was not an easy transition for men who had just come out of some of the fiercest fighting in history. African-American troops, who had fought honorably and won the gratitude of Allied leaders, came back to a cool welcome from a nation that still could not see past the color of their skin. Men were haunted by what they had seen and done. Shell shock was common, what we would now recognize as post-traumatic stress disorder. My own research through several hundred requests for discharge paperwork in the 1920s show many cases of suicides and men driven to insanity. Veteran service organizations like the American Legion grew out of the need to care for so many of these men affected by the war and give them a voice.

If for nothing else, World War I should be remembered by Americans because of the brave sacrifices that these men made on foreign fields so that nations could be free and live in peace. As we approach 2017, the 100th anniversary of the U.S. entrance into the Great War, I encourage all Americans to learn more about the war and take part in events in their communities. The World War I Centennial Commission is the official organization that is planning events for 2017, and coordinating with cities and towns across the U.S. to remember America’s involvement in the war. Please take part. No fallen service member should go unremembered.