Balloon Bombs — How Japan Killed Americans At Home In WWII

Japan’s attack on Pearl Harbor on December 7, 1941, was a shocking display of its ruthless military tactics during World... 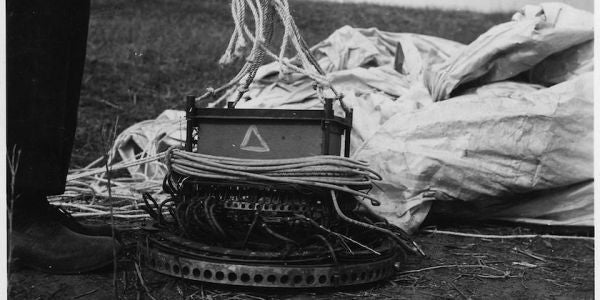 Japan’s attack on Pearl Harbor on December 7, 1941, was a shocking display of its ruthless military tactics during World War II. Over 2,400 U.S. servicemen died during the surprise attack, thrusting the United States into a war that shook the world to its core. But it wasn’t Japan’s final attack on American soil. Roughly two years later, the Japanese came up with a plan to harness air currents to create the world’s first intercontinental weapons: balloon bombs.

Titled ‘Project Fugo,’ the booby-trapped hot-air balloons were designed to ride 30,000-foot altitudes en route to North America, where, if everything went according to plan, they would set fire to the United State’s vast forests. Japan hoped these massive wildfires — particularly in the Pacific Northwest—would create mayhem and disturb the U.S. war effort. Each balloon was essentially a giant, floating Molotov cocktail.

Japanese fire balloon of mulberry paper reinflated at Moffett Field, CA after it had been shot down by a Navy aircraft January 10, 1945Army photo via Wikimedia Commons

According to J. David Rodgers of the Missouri University of Science and Technology, the hydrogen-filled balloon was constructed from mulberry paper, measured about 33 feet in diameter, and was capable of lifting a thousand pounds. The light, sturdy frame was saddled with bags of sand, sensors, triggering devices and a 33 lb. anti-personnel fragmentation bomb. Because the balloons took between 30-60 hours to reach North America, the bomb’s 64-foot fuse was designed to ignite after about three days of flight and detonate after 82 minutes.

Related: This World War II soldier hid in a Philippine jungle for 30 years »

Project Fugo officially launched on November 3, 1944, kicking off a six-month frenzy during which the Japanese fired between 6,000 – 8,000 balloon bombs at North America. The Japanese hoped their origin would be untraceable, but Col. Sigmund Poole, who was the head of the U.S. Geological Survey at the time, was able to track their launchpoint back to the island of Honshu—just east of Tokyo—by examining the bags of sand they were saddled with.

The numbers vary, but experts estimate about 1,000 reached their target, landing anywhere from Northern Mexico to Alaska to Michigan.There was even one discovered in the mountains of British Columbia just two years ago by two forestry workers who used C-4 to blow it up because it was too dangerous to move.

Despite its ingenuity, the strategy had one small problem: the balloons couldn’t be tracked or controlled. Because they were at the mercy of the airstreams they were designed to ride, the balloons ultimately didn’t have their intended effect; though, an Army airborne unit, the 555th Parachute Infantry Battalion was deployed to the Pacific Northwest in the fall of 1945 just in case, earning the nickname “Smoke Jumpers.” To date, only about 300 balloons have been reported as sighted or discovered over the years, with no trace of hysteria — or forest fires — breaking out in the wake of their arrival on American soil.

The Mitchell Monument in the Fremont-Winema National Forests near Bly, Oregon, United States. The Mitchell Recreation Area is listed on the US National Register of Historic Places (NRHP) as the only location in the continental US where Americans died due to enemy action during World War II.United States Forest Service photo via Wikimedia Commons

There was one reported deadly incident, though. On May 5, 1945 in Bly, Oregon, five children and a pastor’s pregnant wife, Elsie Mitchell, were killed as they played with the large paper balloon, unaware of its explosive contents. In 1950, a memorial for the victims, called the Mitchell Monument, was erected in Oregon near the site of the bombing. It reads: “Only place on the American continent where death resulted from enemy action during World War II.”

Project Fugo was a total bust. In fact, for years, few people even knew the balloon bombs existed because the American government asked news organizations to refrain from reporting their sightings. Still, you’ve got to acknowledge the gumption it took to produce this terrifying and unique concept, regardless of how poorly it was carried out.