I remember distinctly being stuck editing in a public affairs detachment’s CHU-based office space on Camp Victory in early 2009,... 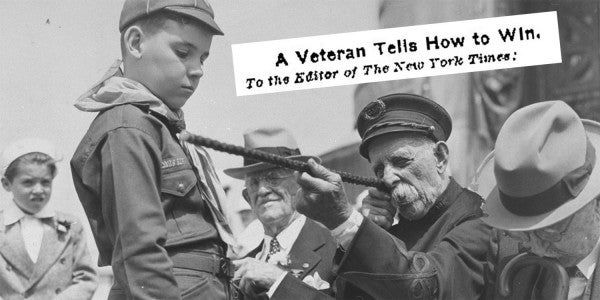 I remember distinctly being stuck editing in a public affairs detachment’s CHU-based office space on Camp Victory in early 2009, a terrible trailer jammed with body funk, bad posters, and a decrepit dartboard, when one of the soldiers — a newly minted E-4, already calculating his future separation pay — started muttering about the war in Iraq, our war, and how to beat the terrorists and insurgents. “Just bomb them all, man,” he said. “Turn it to glass. Then send the armored cav through like lightning. We’re Americans. Let’s do this American-style.”

Well, Specialist, you are definitely American, but you’re not even close to original. Hell, you may even be related to this unnamed veteran from Taylorsville, Pennsylvania, who, 100 years ago this week, offered the New York Times a similar strategy to win the Great War. Let’s call it the Boom of the Unknown Soldier:

Oh look, nothing has changed in 100 years: shitposting veterans still know all the answers to winning all the wars https://t.co/xsIzK0Ooeg

A Veteran Tells How To Win.

A veteran of what? The Spanish-American War? The Moro Rebellion? The Great Hindsight Maneuvers of ’05? So much is unknown.

To the Editor of The New York Times:

There is one way of removing the submarine menace which seems not to have occurred to any one , and that is by destroying the shipyards in Germany where they are being built.

Anyway, tell us, mystery Veteran, how to bomb like we mean it:

This could easily be done in this way: Let us suppose they are in and around Kiel. Very well; assemble a fleet of 8,000 airplanes, well loaded with bombs, in charge of 6,000 American, French, and English aviators of approved mettle, drop the bombs not only on the shipyards, but on the warships and defenses of Kiel, reducing them to powder; then let the allied fleet, preceded by mine sweepers, take possession of Kiel. If there are other shipyards, treat them in the same way.

Yes, hi, I have a question: How will 6,000 men fly 8,000 planes? Never mind. Put ’em in a body bag, Johnny! All you need are 8,000 bomber aircraft — and, of course, defensive support for them. And good targeting. And decent weather. And sufficiently heavy bombs to carry in your rickety 2,300-pound two-seat De Havilland puddlejumper.

Yes…8,000 of the WWI aeroplanes that could take off from Allied bases, find Kiel, bomb Kiel and return to base. Easy-Peasy.

Needless to say, effective strategic bombing didn’t really become a thing until much later. But let’s move on:

It is certainly to be hoped that when our men get over they will exhibit a little American dash, punch, and initiative such as marked our civil and Spanish wars.

In four years of combat, about 620,000 Americans, roughly 2% of the national population, died in the Civil War — more than the number of Americans killed in every other conflict in the country’s history. Taking Puerto Rico in the Spanish war sure was fun, though. Show us some more of that dash, punch and initiative!

So far, we have seen little brilliant strategy — only a brutal pounding back and forth of men and guns in trenches. If there had been a Sheridan or a Stonewall Jackson, a Kilpatrick or a Morgan, a Stoneman or a Mosby among the Allies, we should have seen ere this a dozen light-horse cavalry raids through Germany, destroying highways, railroad bridges, munition plants, &c.;

Yes! Yes! When has a light-cavalry charge in a modern European great-power war ever been a bad idea?

…and I would be willing to wager my hat that Colonel Theodore Roosevelt, with ten regiments of cowboys, without previous drill, in the formation used on the plains, could penetrate Germany from top to bottom and escape scot free, simply because their tactics would be new to the slow-thinking Teuton and our men could escape before he recovered from his surprise.

Wait, this rough-rider snuff-porn fantasy reminds me of another guy I met on deployment:

We're in the home stretch now:

This talk that the war is going to last for years ought to be frowned on. In three months after our men get fairly to work Germany ought to be whipped to a frazzle, not by trench fighting, but by taking her on the flank and from overhead, and by inventions and devices hitherto unheard of in warfare.

Anyway, the story surfaced as part of “NYT 1917,” a Twitter-bot project by India-based journalist Harry J. Stevens that locates and tweets relevant New York Times articles from 100 years ago, as if the events were unfolding today.

“I just thought it was a really cool way to experience history – in real time rather than in compressed time, like it's usually presented,” Stevens told me in a direct message on Twitter.

Stevens says was inspired by Russian propaganda channel RT’s “1917 Live” project, which is tweeting scenes from the Russian Revolution that played out a century ago, culminating in the rise to power of the Communist Party in November 1917. He thought the venerable New York Time and its detailed coverage of the European war would offer an interesting side perspective.

“I would have been happy to do it with any historical period, but this is what was going on,” Stevens told me. “I thought it'd be a fun programming challenge too.”

The unknown vet’s get-some ramble “generated a lot of interest,” Stevens says. “Some vets were saying that it reminds them of hot takes they still hear. I'm not a vet so I don't know.”

Take our word for it, Harry. In the meantime, here’s another news clipping from 1917, about a 23-year Navy and Marine Corps veteran forced to register as an “enemy alien”: