Dunford On The Big Difference Between Iraq And Afghanistan

Since the collapse of the Iraqi army, many senators have expressed concern that the same fate may await the Afghan... 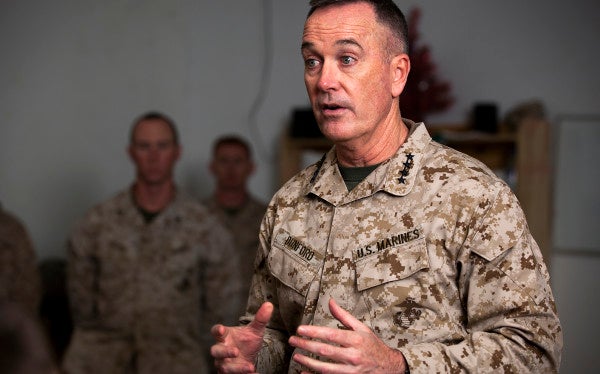 Since the collapse of the Iraqi army, many senators have expressed concern that the same fate may await the Afghan army following the U.S. pullout scheduled for 2017.

But Marine Gen. Joseph Dunford told the Senate last week that he is confident that Afghanistan is a different place with a very different ethnic picture. The same mistakes that led to the current disaster in Iraq don’t have to happen again.

“We knew when we left Iraq that there was work remaining to be done to develop sustainable Iraqi security forces, as well as to ensure that political stability existed in Iraq … In Afghanistan, we have a chance to get that right,” Dunford said last Thursday at his confirmation hearing with the Senate Armed Services Committee.

Much of the ineffectiveness of the Iraqi army is owed to the divisions and bitterness between the Sunnis, Shiites, and Kurds. Saddam Hussein retained power through a reign of terror and a series of brutal crackdowns based purely on ethnic lines, using patronage with Sunnis to oppress the Shiites and repeatedly attempt to exterminate the Kurds.

This animosity was the primary factor in the sectarian warfare during the U.S. occupation, and was only temporarily tamped down. Iraqi Prime Minister Nouri al-Maliki’s blatantly pro-Shiite policies and crackdowns on Sunni dissent has led to much popular discontent and helped propel the Islamic state to its many recent victories with Sunni support.

Dunford’s confirmation hearing for Commandant of the Marine Corps brought many of these worries to the fore. He has commanded the International Security Assistance Force in Afghanistan for the last 18 months.

Some of these concerns were voiced by Sen. Angus King, of Maine. “What's the ethnic makeup of the Afghan army? One of the problems in Iraq appears to be the unequal distribution ethnically or sectarian, I suppose, if that's a word, in Iraq. Is the ethnic, tribal makeup of the Afghanistan security forces representative of the country?”

Dunford replied that the sectarian divisions that crippled the Iraqi security forces do not apply to the Afghan National Army. “The officer corps in the Afghan army is about 40% Tajik, 40% Pashtun. The NCO corps is about the same; the forces are about the same.”

The professional officer corps of the regular Iraqi army and the militias that supported it under Hussein were almost exclusively Sunni. Many former officers of that regime contributed to the sectarian fighting, and still remain a factor to this day.

The Taliban has always had its base of support among the majority Pashtuns, based primarily in the South and East. Pashtun strongholds in Kandahar and Helmand have been reliable hotbeds of Taliban activity. The second largest group, the Tajiks who dominate the north of the country, have been historical rivals.

That is also how the local population views U.S. forces. Maliki was pushed to deny legal immunity to U.S. soldiers because the Iraqis were so opposed to a continued U.S. presence. In response to a question concerning popular support from Sen. Jack Reed, the senior Democrat from Rhode Island, Dunford said this is not the case with most of the Afghan populace.

There were signs of ethnic tensions in Afghanistan rising after accusations of rampant fraud during the recent presidential election. Ashraf Ghani, a Pashtun development specialist, pulled ahead during the runoff vote, and his opponent Abdullah Abdullah, who led the first round of the elections, has cried foul. Threats of rival governments were widespread.

But so far, there’s been little election-related violence, after U.S. Secretary of State John Kerry managed to get both candidates to agree to a full audit of disputed votes, and a commitment to abide by the decision. Both have said they are determined to pursue a long-term security partnership with the United States and other NATO countries.

Though tribal rivalries exist in Afghanistan, factional politics are by no means limited to tribal heritage. One of Ghani’s staunchest backers is the famous Uzbek warlord Abdul Rashid Dostum, who is running as Ghani’s vice president.

Even the Hazara, a minority group composed of primarily Shiite Muslims, have integrated peacefully into the army in the face of a long history of discrimination and oppression from the dominant Tajiks and Pashtuns.

During the hearing, Dunford expressed that his primary concern is that we do not pull out of Afghanistan too soon, and repeating the same mistake we made in Iraq. He concurred with President Barack Obama’s plan to leave a force of 9,800 troops through 2015, bolstered by an expected 4,000 NATO troops. However, he disagreed with the timetable of zero U.S. troops by 2017.

Republican Sen. John McCain asked, “Is there any doubt in your mind that the announcement of a complete withdrawal by 2017 has had an effect on the morale of the Afghan army?”

“Senator, I think all of us in uniform, to include the Afghans, would have preferred that that be a bit more ambiguous,” Dunford replied.