A Glimpse At Humanity In The War Of 1812

John Hollyday served in the War of 1812, where the British invaded the fledgling United States and almost reconquered the... 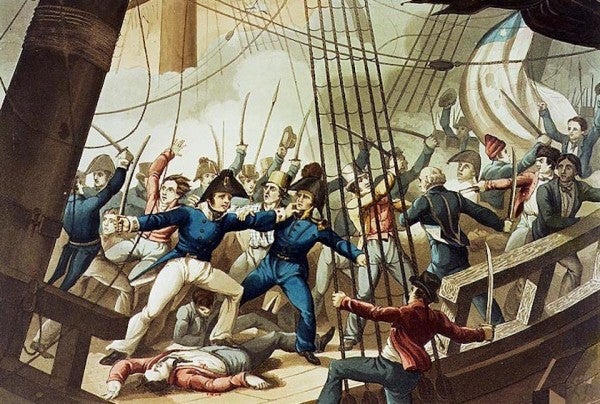 John Hollyday served in the War of 1812, where the British invaded the fledgling United States and almost reconquered the territory they had lost only three decades before.

A touching letter to his wife, Eleanor, offers a unique view of the war.

John had recently joined his father, a Presbyterian pastor, in the territory that would later become the state of Ohio. Living on the banks of the Buckskin River with his wife and their son Wilson, he enlisted in the military in the spring of 1813. The war, mostly skirmishes at this point, was dragging on and the need for more troops was evident.

Within a few months, John found himself on banks of the Sandusky River. From the unseasonably cold barracks at Fort Stephenson, John paints a grim picture of the situation. “There is a grat deal of confution in the camp” because the barracks commander had recently been discharged. Apparently it was politically motivated, since the governor was involved.”

Unlike our professional military, discipline and cohesion fluctuated wildly across units. “18 of our men deserted this morning” because their commanding officer, obviously respected, had been replaced.

John was having none of it. He was a proud American soldier and recognized the consequences of desertion for his future prospects: “I think it is best to stay to such time as I can go home in safety and with some honor.”

Nothing is sugarcoated for his wife, Eleanor. She was a obviously a strong and capable military spouse in the finest American tradition. Despite her youth and family obligations, the corn was planted and everything else is in order. She was steadfast and dependable, as so many have been during the harsh years of warfighting.

John had no way of knowing how long the war would last, or how bad it would get. Two months after his letter was written, the American forces at Fort Stephenson would repulse a daring attack by the British.

About a year later, the British would dispatch an army of 4,000 to Washington, burning down the entire city save for the Marine Corps barracks. Men like John would continue to march, though, protecting the republic in its early years.

His letter closes ominously. Both the danger and love are palpable: “I remaine your affecionate husband till death.” Such is the life of an American soldier.