The new Army Operating Concept, entitled “Win in a Complex World,” was released for public consumption earlier this month. It... 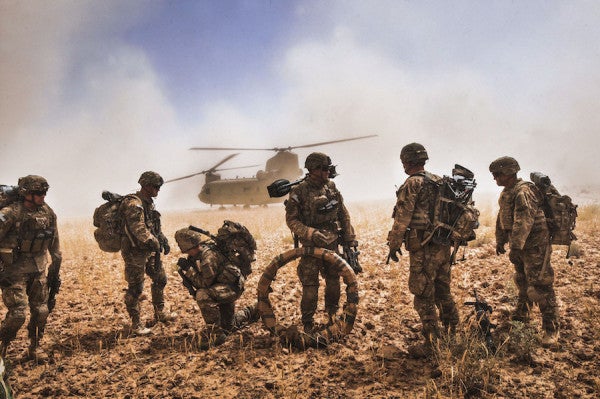 The new Army Operating Concept, entitled “Win in a Complex World,” was released for public consumption earlier this month. It receivedconsiderableattention, primarily due to the exceptionalleadership tied to its construction, but also how it contrasts to the gloom of impending defense budget and end-strength cuts. With the active-Army end strength projected to drop to as low as 420,000 soldiers by 2017 from a wartime high of 570,000 in 2008, Army leadership is rightly nervous about readiness. Soldiers, many who served honorably and deployed to any number of contingencies, are destined to have their careers cut short.

However, the Army Operating Concept serves as a pep rally for the soldier who is nervous about the Army’s future and viability. It is a tool to explain the incongruity between the growingglobalrequirements levied on the Army and the threat of reduced resources to meet them. Most importantly, it serves as the landpower narrative for the general public and jumpstart for budget talks in Congress.

The concept has a little bit of something for everyone. It attempts to assert landpower as not only something vital to the joint fight, but the dominant domain where wars are fought and enemies compelled. It articulates the need for expanded research and development and capabilities. It offers a little comfort for the COINdinistas maintaining that the stability-focused, Special Operations Forces-heavy trends of the past 13 years are something that can be expected in the future.

In spite of everything that the operating concept is, there are some areas that leave it open to questions. Specifically, its greatest weakness is its vision (or lack thereof) of the future geopolitical situation.

The concept is set in a world mapped out as far as 2040, 26 years from now. In this context, Army planners imagine that the geopolitical landscape will look a lot like it does in 2014. China will continue to compete and grow its military. Iran and North Korea — the perennial Bo and Luke Duke to the United States’ Boss Hogg — will continue to stir up regional trouble. Further, transnational terrorist and criminal organizations will continue to pose a threat. And then there is Russia; a threat 26 years ago, opposition today, and a projected competing power 26 years in the future.

Between 2014 and 2040, planners assume that the world will have all of the same problems, threats, and complexity that it does today. And although volatile, geopolitics is assumed to be fairly static with any change from the present occurring only on the margins. This is hard to believe especially when history proves otherwise. For instance, the geopolitical scene in 1988, 26 years ago, was vastly different than it is today. Although Soviet communism was in its last days, the Department of Defense aligned itself against defeating the Warsaw Pact in a potential World War III scenario. Planners then believed that tensions between the United States and and the Soviet Union would continue unchanged into the foreseeable future. But by the next year, the Cold War started to thaw, the DoD budget was tightened, and the world started to change in unexpected ways. The end of the Cold War was a game changer because it left the United States without an opposing superpower and the military without an obvious threat. Arguably, few within the DoD at the time anticipated, or took very seriously, the influence terrorism would have after the fall of the Berlin Wall. And as recent history shows, terror has forced dramatic changes on the military, often at a rapid pace.

So as historical evidence demonstrates the likeliness of large-scale change over the course of a few decades within global politics and power plays, why is the Army Operating Concept not better prepared for this? Why does it not account for global game changers much like the National Intelligence Council did two years ago in its Global Trends 2030? Certainly, predicting the future is difficult, especially when capability development and the congressional budgets that fund it demand some certainty. But the dearth of plausible speculative thinking about what could happen in the world and how the Army will operate within that alternate scenario is unimaginative and limiting.

While the concept fails to conceptualize the changes that will characterize global politics 26 years from now, it shines at underscoring the immutable aspects of war within which the future Army must operate. Taking an anthropological turn, perhaps a positive offshoot from years of needing to understand people, culture, and networks necessary to stability operations, the operating concept fits neatly with what the Army has done over the past year: growing a narrative, or simply stressing an existing one, which elevates the human component and centers on timeless human behavior in war. For instance, despite budget cuts, leader development has remained one of the Army’s top priorities. Returning to board selection for resident attendance to the Command and General Staff College is an example. Retaining and developing top officers and noncommissioned officers not only keeps years of combat experience in the ranks, but also provides agility and flexibility for the complex environment that the operating concept describes. Military families also remain a concern during the current budget fight as they are considered the strength of the soldier.

Beyond the Army’s focus on the individual soldier, leader, and family unit, the Army Operating Concept also broadens its scope to human nature at war, drawing from the writings and theories of Thucydides and Clausewitz. Both certainly are not new concepts within the U.S. Army, but are set loose from the realm of academia and applied in very tangible ways:

Nations and organizations in the future will fight for the same reasons that the Greek historian Thucydides identified 2,500 years ago: fear, honor, and interest. Every armed conflict exhibits some combination of violence, emotion, policy, chance, and risk. Fundamentally, war will remain a contest of wills.

Although the particulars of future conflict may be up to the variables and conditions of the times, the heart of conflict and war boils down to very basic human drives and desires. This seems so obvious that it may be easily overlooked. Wars have never and will never start out of a vacuum. And their execution is not always governed by rational action. The operating concept seems to suggest that young Army leaders of today who want to be senior leaders of the future need to be a combination of historian, psychologist, and anthropologist more than engineer. The roots of conflict will always have very likely, even if not predictable, causes.

The human dimension is so critical to the Army’s ability to function and the continuities of war that the influence of technology takes a back seat. The concept prepares us for the technological dominance that has defined much of the Army’s battlefield superiority to be all but completely negated.

In spite of this, the concept implies that Army leaders will supplant technology as the central figures in operating doctrine. Limited by their own cognitive abilities, leaders will be developed to possess “…the experience, maturity, and judgement previously expected of a more senior experienced leader.” The concept sets the stage for the soldier to reclaim preeminence within his own Army.

Ultimately, the Army operating concept makes the landpower narrative clear and places the Army at the center of the joint fight. It is a rallying cry and a necessary re-explanation of its relevance. As Secretary of the Army John McHugh stated at the recent Association of the United States Army conference:

…We must recognize that we cannot be the Indispensable Nation without the Indispensable Army; for as history has shown, airplanes and ships alone cannot win our wars or protect the peace. As important as they are, no Hellfire-equipped drone ever reclaimed lost territory. No Tomahawk missile ever conducted a ground counter-offensive. No bomber ever mentored or trained soldiers of an allied nation, building up capacity and credibility in the process. Now, more than ever, we — this nation — need our Soldiers.