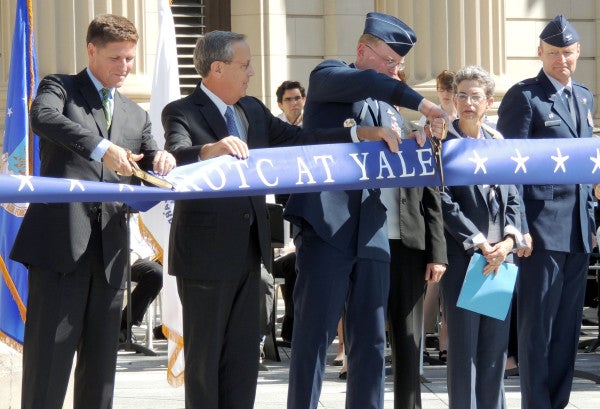 Saturday, September 6, 2014 from 9 a.m. to noon, the Yale Veterans Association will hold a college admission information session for veterans at the Yale Club of New York City.

Founded in 2010, the Yale Veterans Association is a non-partisan, non-political organization, comprised of Yale alumni, students, faculty and staff.

This session is part of the group’s ongoing advocacy and outreach efforts and will include representatives from Yale University, Dartmouth College, Vassar College, Wesleyan University, and the Posse Foundation Veterans Program. Veterans can register for the event by sending an email to yvacollegeadmissionssession@gmail.com.

According to the Department of Labor, at least 1.4 of the 2.8 million post-9/11 veterans do not have bachelor’s degrees. Most of these veterans come from the enlisted ranks. The Yale Veterans Association is acutely aware of that fact. The association believe that community colleges can be excellent preparation for any four-year, bachelor’s degree granting, school. The group hopes that the Yale Veterans Association’s college application information session will be an influential and effective example of how to bring community college veterans together with Ivy League schools and other elite academic institutions.

The Yale Veterans Association is encouraging all veterans who are past or present students at community colleges to attend, however, veterans who have distinguished themselves as members of the Phi Theta Kappa Honor Society, the Dean’s list, or other academic honor societies are highly encouraged to attend. The session is a chance for veterans to meet with college admissions representatives and to hear veteran-focused presentations on the best practices for completing an application.

Veterans will also be able to meet other enlisted veterans who have made the transition to Ivy League schools.

The day will begin with a welcome from Josh Ray, a prior enlisted U.S. Navy Veteran, who graduated from Yale College in 2013. Josh is also a graduate of San Diego Mesa College, where he was co-valedictorian of his graduating class and founded the Mesa chapter of Student Veterans of America. Josh’s remarks will touch on his experiences as an enlisted sailor considering an Ivy League School, as a Mesa student, as a Yale student and, now, as a Yale graduate working for the McChrystal Group.

The Yale Veterans Association wants veterans to strongly consider pursuing a bachelor’s degree, and also wants veterans to know that they are highly valued by Ivy League and elite schools. The rich depth of their experiences in the world often makes for competitive applications for admission. The goal is to give veterans currently attending community college the information they need to complete the best applications possible. Ultimately, the Yale Veterans Association hopes that other veterans alumni groups, inside and outside the Ivy League, hold similar college admissions information sessions, and that community college veterans will benefit.

For institutions and press, the point of contact for all questions regarding the event is yvacollegeadmissionssession@gmail.com. Josh Ray can be reached at (858)568-3197 or josh.ray@aya.yale.edu.