There is a growing problem in the military reserve and National Guard communities: The financial resources to accomplish our mission... 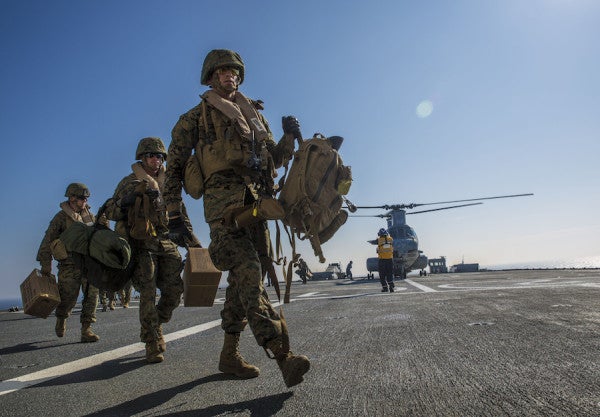 There is a growing problem in the military reserve and National Guard communities: The financial resources to accomplish our mission are being drastically reduced to the point that we are having difficulty maintaining our readiness as force.

As a member of the Selected Marine Corps Reserve, I am obligated to drill one weekend a month and take part in a two-week training evolution during the summer. However, while preparing to drill recently, I was informed that the drill weekend was in jeopardy of being cancelled due to lack of funds. When I asked my active-duty support staff how this could happen, no one had a good answer. They pointed to “financial mismanagement” at the reserve forces level. But that is only part of the story. The reason the force is struggling to manage its finances is because Congress has dramatically cut the Defense Department’s funding. It seems the Marine Corps is being asked to conduct the same mission — to act as America’s global crisis response force — at lower costs and with fewer Marines.

Upon further investigation, I discovered the financial problems were not confined to the Marine reserves. While the Marine reserves were ultimately able to scrape together enough money to pay certain units, mine included, to come in and drill, the National Guard, ultimately, had to cancel it drills in multiple states, including Illinois, Delaware, Maryland, Ohio, and Hawaii.

This is a recipe for disaster. Without these weekend drills, the force loses its ability to operate on an effective level and this will, in turn, affect our nation’s ability to ensure our national security.

I speak of maintaining readiness standards as not only a Marine reservist but as a major and company commander in charge of nearly 400 individuals. My mission is to train to the required standards the Marines under my charge, prepare them to deploy if our country should call them to do so, and ensure that they are taken care of from a professional standpoint. It is hard enough maintaining training standards when you only see your Marines or soldiers one weekend a month. However, these difficulties are further intensified by the constant threat of cancelled drills.

In addition, this sort of uncertainty or drill cancellation has a profoundly negative effect on the units’ morale. I have Marines who sacrifice their time and put forth great effort in the name of being prepared to defend their country. What can I say to the Marine who asks me why this is happening? Tell him it is what it is and there’s nothing anyone can do about this?

Leadership often calls for us to put up a brave front to convince those we lead that we know what we’re doing; that they should have confidence in the determined course of action. However, there are times, such as this, when the people we are trying to lead see through that front. When that happens, unit cohesion, morale, and effectiveness can all break down.

I speak of the potential impact of these cuts and decisions in personal terms, but this issue presents a much larger problem to the nation as a whole. I am not the only one who sees what’s happening as a serious error in judgment. In a recent Washington Post op-ed, Mitt Romney argued against reducing the size and budget of the U.S. military, citing threats from Russia, China and Iran, as well as the multi-mission role of the military that includes “preserving the freedom of the seas, the air and space; combating radical jihadists; and preserving order and stability around the world as well as defending the United States.”

How can we have a strong military if we cut the funds and reduce the troop numbers to levels not seen since before World War II? Don’t alarm bells go off in the heads of our leaders when we look at history?

Whenever we think we have ended one conflict, we have reduced our forces. After Vietnam, we cut as much as we could, almost to erase the memory of that war. After the first Gulf War, again, we sought to wring ever last dollar out of the Defense Department. While there were perfectly legitimate reasons for each drawdown relative to the events of the time, there was a cost. We reduced our ability to project power around the globe. It is my contention that this has only lead to future conflict.

And what happens when another conflict explodes? You guessed it; we build our forces right back up, but at the cost of lost time. During World War II, it took months, if not years, after Pearl Harbor for us to have a truly effective fighting force. Similar to today, in the 1940s, the United States grappled with isolationist feelings and the memory of economic calamity, which worked together to support the notion that we needed to retreat from the world. While understandable, there was a cost. We were unprepared for the next conflict. In the meantime, our enemies made great gains. If not for the fortitude of Britain and other allies, we may have lost that war.

What will happen when we’ve cut our forces to the bone and ISIS or Iran, or some other enemy, strikes at us in a way that calls for a robust national response? What then?

These cuts will have drastic effects on our military posture should we need to engage in any future foreign engagements or other crises that requires a military capability or response. It also demonstrates a complete disconnect between our leadership’s goals and its actions. This reduction in the amount of funds and troop levels is occurring at a time when foreign threats are only increasing, where crises are boiling over in different regions around the world, and where the military have already been called up to engage in missions against ISIS and the Ebola outbreak.

This country must work to reverse the draconian cuts to our military forces, and instead, build them up to ensure we are the most capable, most powerful, and most fearsome fighting force in the world. The alternative is untenable.