Why Airstrikes On Iraq May Not Be Enough

On August 7, President Barack Obama authorized military airstrikes on strategic Islamic State of Iraq and the Levant targets, such... 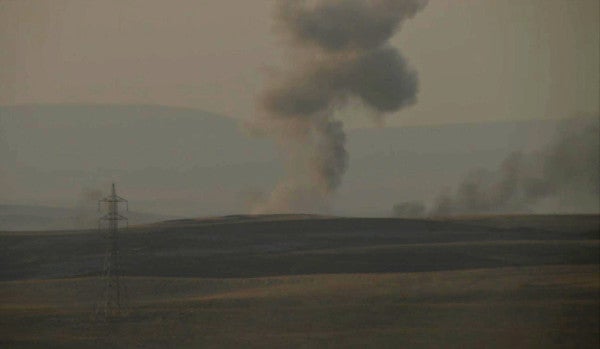 On August 7, President Barack Obama authorized military airstrikes on strategic Islamic State of Iraq and the Levant targets, such as artillery positions, weapons caches, and enemy strong points. To me, this raises a few distinct thoughts.

What took so long? Why didn’t we act sooner? Could early intervention have mitigated this before it turned into a massive disaster?

ISIL militants literally rolled through half of Iraq within just a few weeks; seizing key cities that American and Iraqi blood was shed in securing; most notably, the city of Mosul, which is a strategic city and one of the largest in Iraq. They also seized weapons, money, and new recruits, effectively making them the richest terrorist organization in history, according to multiple news outlets, including the Telegraph and the Washington Post.

Okay, so we started bombing. Great. But these seem like the type of folks who will have no second thoughts about surrounding themselves with groups of children or zip-tied prisoners. Imagine that being leaked on CNN: Bomb hits ISIL target, kills children and hostages. ISIL will adapt quickly to our methods. Airstrikes are pricy and we can’t possibly bomb every group of ISIL fighters who are out there cutting heads off. That leaves us with an ultimatum: Will we send troops back in?

On Saturday, Obama said that American combat troops will not return to Iraq and that this will instead be a humanitarian mission that includes support to members of a religious minority group trapped on a mountain top. The president has admitted that this situation will take more than a few weeks to solve, but has done little to outline a plan of action. So, what are a few of our options for providing support on the ground in light of this “humanitarian” mission?

The American public is weary of war and conflict in the Middle East and is not keen on the idea of the United States getting involved in another sustained conflict. Even our robust special operations forces are spread thin right now and would require complex support and logistics in order to remain in the Iraq area of operations for sustained operations. A mix of SOF and conventional forces may be able to force ISIL out of Iraq in the near term, but that commits us to the region again and would come with extreme political baggage.

Will we sit by and watch this drama unfold and drop some bombs on key targets or will we put more boots on the ground and squash this thing properly? Both options have significant drawbacks. Perhaps arming and supporting large contingents of Kurds could be a good alternative with the use of military advisors to support them, but even that requires a dedicated logistics and supply chain.

Obama has committed the administration to political avenues in hopes of curbing the sectarian divisions that are currently tearing the country apart at the seams and has tasked Secretary of State John Kerry with leading diplomatic efforts. How Kerry intends to bring ISIL and the Iraqi government together for talks remains an open question. ISIL appears to be a group that understands only violence and as such there may be no amount of diplomacy that can reach those in leadership positions.

Implementing both diplomatic and humanitarian approaches may still not be enough to stop ISIL’s murderous reign; and if they both fail, then what is our responsibility to the people of Iraq? It has often been said that all that it takes for evil to thrive in this world is for strong nations to sit idly by and do nothing to help those who desperately need our assistance. The problem, however, is that with so much evil in the world we still must calculate where and when to interact. The difference between Iraq and other current humanitarian crises around the world is twofold: First, we are responsible for the current mess in Iraq to some degree. While it is true that we spent ample time and resources preparing Iraq’s security forces and government for our withdrawal over the past decade, we also created the fragile situation as it existed before ISIL’s violent takeover just weeks ago.

Second, there is an inherent national and international security threat. Unlike isolated sectarian conflicts in countries of Africa, for instance, ISIL militants have stated that they will not stop until they “raise the black flag over the White House.” In the video, an ISIL fighter further says, “I say to America that the Islamic Caliphate has been established and we will not stop.” This group, armed with an influx of guns, money, and new recruits, shows no signs of backing down. If drastic steps are not taken to stop them, this could spread further into Jordan, Iran, Turkey, and even the United States.

So, here’s the problem: something needs to be done. A decision needs to be made if diplomatic and humanitarian measures do not stop ISIL rebels from killing their way through Iraq. I doubt there is a single person reading this who believes that ISIL militants will sit down to peace talks and just say, “Okay, you’re right. We’re sorry, we will give this stuff back and allow Iraq’s fragile government to regain control of these cities; and we will stop murdering civilians.”

Someone is going to have to fight these guys. While drawing large U.S. forces back into this conflict is almost certainly not the right answer, our leadership needs to decide what is, and do it soon. The Kurds are low on troops, ammunition, weapons, equipment, supplies, and logistical support. Arming them to fight ISIL is a potential solution, but that again requires us to arm and support large numbers of another military. Of course, we have tried similar strategies before, such as arming the mujahideen against the Soviets in the mid-1980s, and we all see how that turned out. Another option is to continue to arm and support the Iraqi military, but those weapons and supplies keep falling into the hands of ISIL anyways.

Airstrikes are a good start, but simply are not going to be effective enough to stop the killing and terror that is currently taking place on a grand scale. It is not a question of whether ISIL needs to be eliminated as an organization, but rather who will do it.

Meanwhile, people continue to die and ISIL gets stronger. The United States needs to come up with a long-term strategy soon that considers all of these challenges before a revitalized war in Iraq is the only option left on the table.