New Report Reveals Evolving Terrorist Threat Against the US 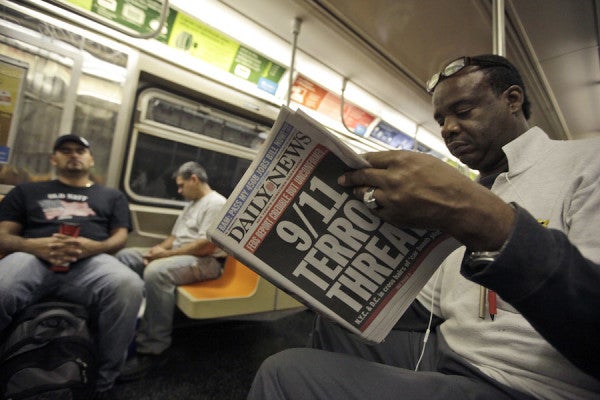 “I made clear that as part of this campaign, the United States would take action against targets in both Iraq and Syria so that these terrorists can't find safe haven anywhere. I also made clear that America would act as part of a broad coalition. And that's exactly what we've done.”

With the addition of yet another jihadist group that the United States has targeted for destruction, it would be wise to look to some of the enemies of the same stripe who we already face.

A new report by the Bipartisan Policy Center of the New America Foundation sheds some light on the threats the U.S. faces from al-Qaeda affiliates across the world, and how much danger we’re actually in. Here are a few takeaways from the report:

Al-Qaeda is not the threat it used to be against the United States.

The report notes that there has not been a successful major attack on the United States since the attacks on Sept. 11, 2001. It credits this reprieve with the introduction of the controversial no-fly list, a vast expansion of Joint Terrorism Task Force fusion centers, and an intelligence activities budget that has nearly tripled from $26 billion in 2001 to over $72 billion today. The FBI has also done more to track individuals traveling overseas for the purposes of jihad.

But beyond domestic security, the overthrow of the Taliban as state sponsors of al-Qaeda in Afghanistan, and Special Operations Forces activities against al-Qaeda and its affiliates across the globe, are seen as having gutted the terrorist organization’s central leadership. CIA drone strikes in Pakistan, which peaked in 2010, have hit their ranks hard, with 41 of their leaders killed during Obama’s tenure alone. Only four senior members, including chief Ayman al-Zawahiri, are believed to be left alive in Pakistan.

This has left al-Qaeda far more fractured and decentralized than it has been in the past, and though the group is now believed to be operating in at least 16 countries, there is little direction from the top leadership, and the lack of central command is showing. Letters from bin Laden’s compound show an organization struggling to exert control over its affiliates, and revealed scolding of the Pakistani Taliban over its ruthless killing of large numbers of Pakistani civilians. This has not deterred them from continuing such attacks.

The threat of “homegrown” terrorism is real, but small.

Al-Qaeda has used social media in an attempt to get militant Americans to launch domestic attacks, the best known of which is the propaganda of U.S.-born cleric Anwar al-Awlaki and jihadi publications such as “Inspire”magazine.

This effort has met limited success, despite well-known incidents like U.S. Army Maj. Nidal Hasan’s Fort Hood shootings and the 2013 Boston Marathon bombing. Only 25 people have been killed by jihadi extremist violence in the United States since 9/11, as opposed to 38 believed killed by perpetrators attached to various American right-wing groups.

Of the 50 plots to conduct on an attack on the United States, nearly half were initiated by suspects already under surveillance, and a third were implicated by tips from family members or the Muslim community. Only eight were actually operations directed by foreign terrorist organizations, which speaks to the problem of “lone wolves” with little to no outside support.

There is a great deal of concern about the estimated 100 Americans who have traveled to Iraq and Syria to join the fighting, but this is not an unprecedented problem. When the U.S. backed the Ethiopian invasion of Somalia in 2006 to fight al-Shabaab, more than 40 Americans are believed to have traveled there to join the jihadist group. Of those, 15 have allegedly died on the battlefield or as suicide bombers, and none of the others have committed attacks on American soil.

Of those who have fought for ISIS, it has been reported that some have returned, though the FBI is apparently keeping tabs on them.

There are serious questions about our counterterrorism policies.

Drone strikes by the CIA have been a key tool in efforts against jihadist groups, but the controversy and collateral damage has been considerable. Since 2004, there have been 377 drone strikes in Pakistan, killing upwards of 3,496 people, and 113 strikes in Yemen have killed upwards of 1039 more, the report said.

Though the effect of these strikes on al-Qaeda leadership have taken a severe toll, the civilian cost is believed to have been high, and many human rights groups and the United Nations have expressed reservations ranging from concern to outrage. Anger and fear among populations facing random death from the sky could simply contribute to making radicalization worse.

Last year’s leaks by former National Security Agency employee Edward Snowden, which revealed the NSA was collecting American phone records in bulk, sparked widespread anger and concerns over privacy and civil liberties. Political leaders and member of the intelligence community maintained that the program was instrumental in preventing attacks against the homeland. But an investigation by New America Foundation found not a single terrorist attack had been prevented by the program.

But the diplomatic backlash over such intelligence has been heavy. Beyond outrage from foreign leaders and populations over such sweeping surveillance, the revelations have a heavy economic cost as well.

There are dozens of extremist groups scattered over much of the globe whose ideologies may be antithetical to the West, and most of them have been unable to inflict much direct harm on U.S. soil. The biggest threat is strikes at U.S. interests abroad, such as the recent murders of journalists and attacks on embassies. These are real dangers, but as we embark on another Middle East campaign, it shouldn’t be based on an existential fear at home.