President Barack Obama made his case for continuing American involvement in a region he had just years earlier declared victory... 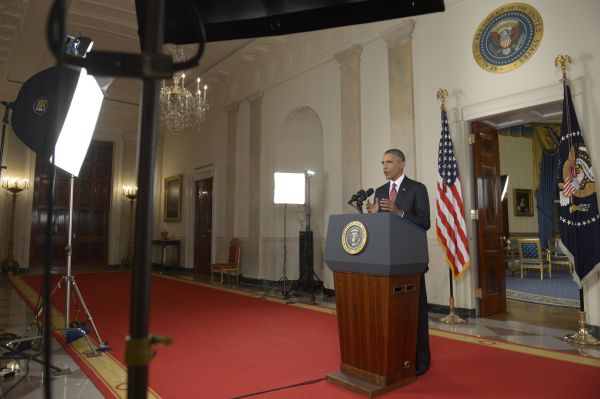 President Barack Obama made his case for continuing American involvement in a region he had just years earlier declared victory in a prime time speech to the American people on Wednesday night.

“In a region that has known so much bloodshed, these terrorists are unique in their brutality. They execute captured prisoners. They kill children. They enslave, rape and force women into marriage. They threatened a religious minority with genocide. And in acts of barbarism, they took the lives of two American journalists — Jim Foley and Steven Sotloff,” Obama said, outlining his reasons for US re-entry in the war that began with airstrikes against IS targets in northern Iraq on August 8th.

The Islamic State of Iraq and the Levant, a radical Sunni offshoot of Al-Qaeda, has gained a notorious reputation for unbridled savagery. They have sworn to a campaign to convert or slaughter religious minorities and Shiite Muslims across the Middle East, all in the name of establishing a so called Caliphate. Their campaign of ethnic and religious cleansing across northern Iraq has shocked a US populace weary of war into a majority support for the third major U.S. military intervention in Iraq since 1991.

The complicating factor is expanding U.S. involvement in Syria. Obama has pledged to support moderate Syrian rebels in a civil war that now includes the threat of ISIL.

“Across the border in Syria, we have ramped up our military assistance to the Syrian opposition. Tonight, I again call on Congress, again, to give us additional authorities and resources to train and equip these fighters. In the fight against ISIL, we cannot rely on an Assad regime that terrorizes its own people — a regime that will never regain the legitimacy it has lost.”

Another foray into what has been a perennially unpopular war has produced a predictably wide array of responses, even as Congressional leaders seem inclined to give the President whatever powers and resources he needs, though there are calls for official Congressional votes and approval.

But the national security community’s reaction to watching the speech live and voicing their thoughts on Twitter reflect the messiness and complexity of the situation.

Obama tonight gave up his ten year dream to be the president remembered by history for ending two wars.