An F-16 Collided With A Cessna In South Carolina

An F-16 Fighting Falcon crashed after a collision with a civilian-operated Cessna today in the skies over South Carolina, according to... 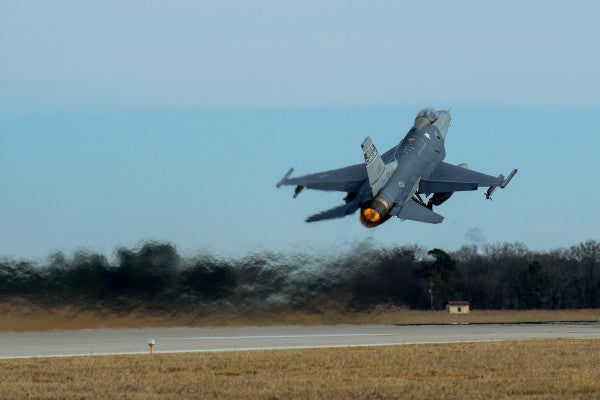 An F-16 Fighting Falcon crashed after a collision with a civilian-operated Cessna today in the skies over South Carolina, according to multiple news outlets. The pilot reportedly ejected at the scene. The status of the Cessna pilot or any passengers was not immediately available, however, local news affiliates have reported that the fuselage of the Cessna aircraft has been recovered.

The crash reportedly occurred above a field approximately 11 miles north of Charleston, South Carolina. The crash occurred at 11:03 a.m., according to a statement released by the Federal Aviation Administration.

Hannah Moseley, a local Live 5 News reporter in South Carolina, said on Twitter that the pilot was recovered in short order by a civilian in a pickup truck. Citing sources with the Berkeley County Fire Department, she said the airman was now being airlifted to a hospital.

Citing a press conference with Berkeley County rescue authorities, BuzzFeed News reports that the pilot is “in pretty good shape,” according to authorities.

A witness told the local NBC news affiliate that he saw two aircraft collide in midair and produce a large explosion. There was a “ball of fire in the air,” he reportedly said.

The local ABC News affiliate in South Carolina reported that the aircraft belonged to Shaw Air Force Base in Sumter, South Carolina. The installation is home to the 20th Fighter Wing, which hosts the 55th, 77th, and 79th Fighter squadrons all of which operate the F-16.

An image shared on Twitter of the wreckage from the F-16 appears to show the aircraft adorned with the colors of the 55th Fighter Squadron:

The F-16 is one of the oldest and oft-tested fighter platforms in the American military arsenal. The aircraft first became operational in 1978. It is presently employed by dozens of countries around the world, including Israel, Pakistan, Turkey, and Egypt.