Another American service member has been killed in Iraq, Defense Secretary Ash Carter announced during a press conference in Germany... 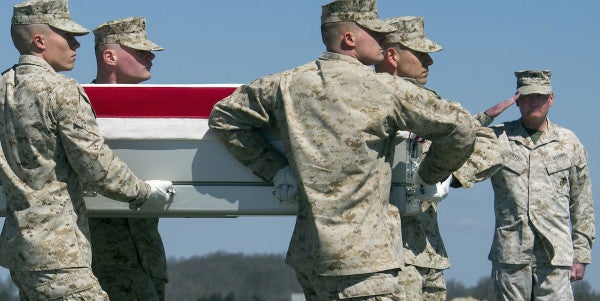 Another American service member has been killed in Iraq, Defense Secretary Ash Carter announced during a press conference in Germany on May 3, saying, “It is a combat death, of course. And a very sad loss.”

Carter provided few details of the circumstances surrounding the death, and the service member has yet to be identified, but reports from local media outlets have begun painting a clearer picture of what happened.

According to the Kurdish news site, Rudaw, the American, who, CNN reports, was a Navy SEAL advising local peshmerga forces, was killed during an intense firefight that erupted after 400 ISIS militants assaulted the Christian village of Teleskof, located less than 20 miles from the ISIS stronghold of Mosul.

The battle, which purportedly began with the detonation of two ISIS suicide bombers, failed to inflict peshmerga casualties, Rudaw reports.

Maj. Gen. Jaber Yawer, a peshmerga spokesman, told The Associated Press that the American was killed by ISIS sniper fire, confirming that the attack took place in the vicinity of Teleskof.

Teleskof, a tiny, ramshackle village surrounded by vast fields in the Nineveh Plain region of northern Iraq, has been under Kurdish control since ISIS was pushed from the area in 2014. Until now, it has remained relatively calm; though, Kurdish forces, backed by American aircraft and special operations forces, do occasionally clash with ISIS militants, who operate from a string of frontline villages only a few miles away.

A video posted on the Facebook page of Dwekh Nawsha, a local Christian militia based in the area that is one of the few in Iraq to openly accept Western volunteers into its ranks, shows what appears to be smoke from the explosions rising ominously in the distance.“The fight inside Teleskof,” reads the tagline. “Too many snipers from IS attack on the troops.”

This is the third American combat casualty suffered since the start of Operation Inherent Resolve. In March, a U.S. Marine was killed by ISIS rocket fire in the village of Makhmour, which is also located near Mosul. And in October 2015, an American special operations soldier was killed during a raid on an ISIS prison.

According to Rudaw, the ISIS militants have been driven out of Teleskof and the surrounding area with the help of U.S.-led coalition airstrikes.