Meet the Man With The ‘Luke Skywalker’ Prosthetic Arm 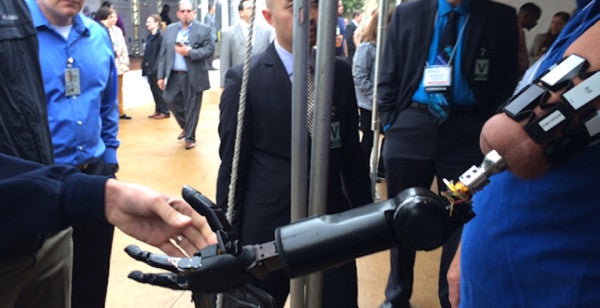 A Florida man who lost his left arm above the elbow to cancer eight years ago stopped by the Pentagon courtyard on Wednesday to show off the U.S. military's latest research into prosthetic technology.

The futuristic prosthetic caught the attention of numerous attendees — not only could he control the hand and fingers with his mind, the device was also attached by way of a titanium stud surgically implanted and affixed to the living bone of his upper arm.

Johnny Matheny of Port Richey last year became the first person in the U.S. to undergo a medical procedure called osseointegration, which is the direct surgical attachment of a prosthesis to the body.

The Defense Department is moving quickly to better develop the technology — it has already agreed to finance 17 such operations this year and another 17 next year, he said.

Matheny's surgery was performed last June at Johns Hopkins University, a leader in prosthetics and a partner with the Pentagon's research arm, known as Defense Advanced Research Projects Agency, or DARPA.

Matheny and his arm were among more than 60 agency-funded programs on display at the Pentagon Wednesday for an event known as DARPA Day.

Attaching a prosthetic directly to the body has long been a goal of scientists and patients, but one that until recently was relegated to the realm of science fiction. Even controlling a prosthetic arm by thought was achieved before doctors successfully integrated a prosthesis to living tissue.

The latest breakthrough brings scientists and doctors even closer to what has come to be called the Luke Skywalker Arm, named for the protagonist of the “Star Wars” movie franchise whose severed arm was replaced by a robotic one that appeared and functioned like his natural arm.

Matheny's state-of-the-art robotic arm attaches to a stud inserted directly into his arm at the remaining part of the limb, and nerve reassignment surgery allows him to control the arm and hand.

“It's got the dexterity to reach down and shake a young child's hand and, if someone yells 'Fire! Fire!' and the car behind me is on fire, [I] can reach around, grab hold of the car door and 'bam!' Pull the door right off.”

The arm and hand has a motor for each joint, enabling the latter to do pretty much what any healthy hand can do — point, pick things up, grasp, shake hands, and make the “okay” sign — tips of thumb and index finger touching with the other three fingers pointing up.

“This hand has the ability to do everything your hand does, with the exception of the Vulcan 'V',” he said, referring to the “Live long and prosper” greeting created by “Star Trek's” Mr. Spock.

Beyond that, it's all good, according to Matheny.

The surgery has been done a few times in Europe, though reportedly there have been problems with infection.

Matheny said that has not been a problem for him.

Doctors found that by leaving a one-inch gap all around the implant area, the covering it up for a week and then leaving it to heal, antibodies “keep flushing the bad bacteria out as slowly heals” around the stud.

“Me being the first one” to have this surgery, he said, “you'd think I'd want to baby it. I didn't. I threw everything under the sun at it. At home I was out mowing the grass, amid the pollen, the grass, the dirt.”

He said he kept it clean — washing the area in the morning and at night — with a non-bacterial soap that contained no perfumes or dyes.

The next phase includes a home study, with Matheny taking the arm home with him. As of now, it stays in the lab.

The fingertips of the hand already have tactile sensors that will provide Matheny with the ability to feel soft and hard, hot and cold, liquid and solid when the project advances yet again. Doctors at Johns Hopkins already have performed the targeted muscle reinnervation needed to help restore a sense of touch.

“They're going to put an implant in the nerve endings” under the Myo armbands around the bicep, he said, and the signals will travel from fingers to nerve endings and to the brain via Bluetooth.