On July 15, 2012, Marine Staff Sgt. James Sides’ life was dramatically changed when he was badly injured during his... 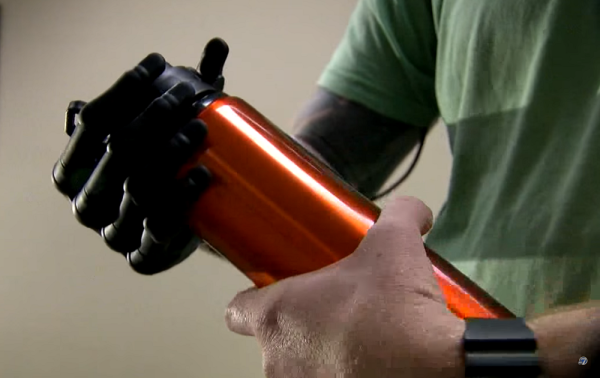 On July 15, 2012, Marine Staff Sgt. James Sides’ life was dramatically changed when he was badly injured during his second tour to Afghanistan. Sides served as an explosive ordnance disposal technician and was attempting to disarm an improvised explosive device when it detonated underneath him.

The blast cost him part of his right arm below the elbow and loss of sight in his left eye, according to a 2013 Marine Corps Times article.

In June 2013, just a year after he was injured, Sides’ life changed again when he became the first person to receive an experimental prosthetic hand during an operation at Walter Reed National Military Medical Center in Bethesda, Maryland.

Called the implantable myoelectric sensor, or IMES for short, the system uses tiny sensors the size of rice grains to communicate with the muscle in Sides’ upper arm. The prosthetic was designed by the Alfred Mann Foundation, a research organization that approached Sides while he was at Walter Reed and offered him the opportunity to receive the new system.

The sensors read the muscle movement in Sides’ upper arm, and bypassing his mind, relay that information to a decoder box worn on the hip. The box relays the signal to the prosthetic hand, which responds and moves, according to a Jan 2014 article by Popular Science.

With the IMES technology, Sides can now can open and close his new hand, laterally rotate the thumb, and rotate it at the wrist. The range of movement provided by the prosthetic allows him to unscrew the tops of bottles, maintain a hold of items, and even give a firm handshake.

“When I go to shake someone's hand it's got sensors in there to stop when it feels resistance,” said Sides in an interview with ABC 7 Denver.

The range of motion provided by the prosthetic means that daily chores and routines are no longer a struggle, said Sides, who added, “I didn’t think this technology would come out in my lifetime.”

Watch the YouTube video of Sides’ prosthetic hand in action: