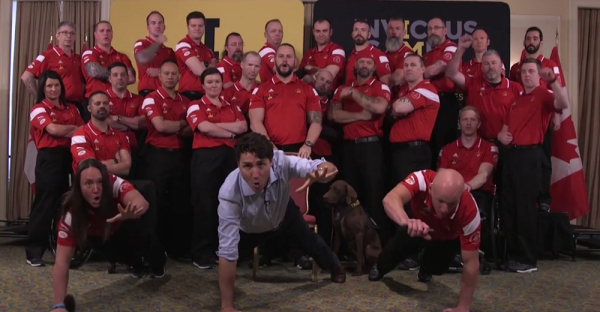 Canada’s Prime Minister Justin Trudeau joined President Barack Obama, the first lady, and the British royal family in some pre-Invictus Game trash talk on May 2. The Invictus Games are an international sporting event for sick or injured military veterans and service members.

In a short humor video posted to his Twitter account, Trudeau is seen sitting in front of the stern-faced athletes that make up Team Canada.

“I just thought I’d show our friends in the U.S. and the U.K. how Canada brings it,” Trudeau says, before he hops out of his chair and joins two athletes doing pushups on the floor.

Dear @POTUS, @FLOTUS and @KensingtonRoyal – did someone say "bring it?" Canada's ready for @InvictusOrlando.https://t.co/TxBAMPvTYs

Trudeau’s video followed a Twitter post by the first lady, Michelle Obama, and the president. The video was posted from Michelle Obama’s Twitter account to the British royal family, and shows the president and first lady standing in front of three tough-looking service members.

Hey, @KensingtonRoyal! Are you ready for @InvictusOrlando? Game on. pic.twitter.com/S34KrEv5Is

“Hey, Prince Harry, remember when you told us to ‘bring it at the Invictus Games?’” the first lady asks, before the president adds, “Careful what you wish for!”

Not to be outdone, the royal family responded in kind later that day.

Unfortunately for you @FLOTUS and @POTUS I wasn't alone when you sent me that video ? – H.https://t.co/sjfSQvkzb6

The good-natured videos have helped create a media buzz ahead of the 2016 Invictus Games, which begin on May 8 in Orlando, Florida, this year. The first games were held in London in 2014, after Prince Harry was inspired to start the international sporting event after attending the 2013 Warrior Games.

Both the Warrior and Invictus Games are a way for injured veterans to use sports to help drive their recovery. The word “Invictus,” is Latin and means “unconquerable” or “undefeated.” Next year, the games are expected to have as many as 600 athletes from 16 countries.