As of Wednesday afternoon, Oct. 28, a North American Aerospace Defense Command surveillance blimp is floating over Bloomsburg, Pennsylvania, after... 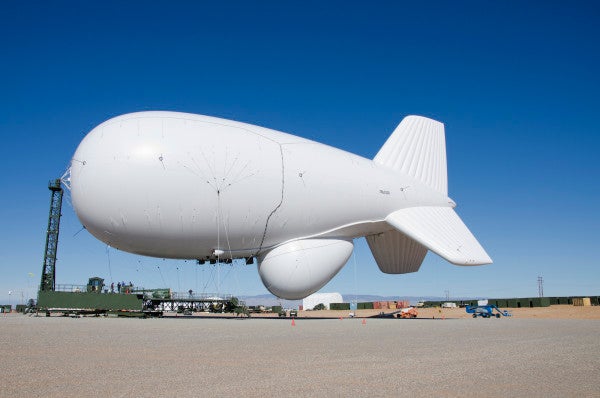 As of Wednesday afternoon, Oct. 28, a North American Aerospace Defense Command surveillance blimp is floating over Bloomsburg, Pennsylvania, after becoming untethered from its Maryland post at Aberdeen Proving Ground.

Two F-16 fighter jets are tracking the Joint Land Attack Cruise Missile Defense Elevated Netted Sensor System blimp, or JLENS, which is floating now at an altitude of roughly 16,000 feet, according to CNN.

The blimp is part of a system of two helium-filled aerostats that float 10,000 feet in the air to conduct defensive aerial surveillance over large areas. The system can oversee an area largely the size of the state of Texas.

According to a statement from Pennsylvania Gov. Tom Wolfe’s office, state officials are “closely monitoring” the situation.

A NORAD statement says that more information about how the blimp was detached is coming.

Raytheon, which produces the aircraft, has described the likelihood that the tether would break as “very small,” and it's unclear what the current danger is to the public or how the blimp will be brought back down.

While there is certainly a national security concern here, social media is having some fun, including several memes and a several Twitter accounts. @NORADBlip and @RealNORADBlimp are two of the best, chronicling this blimp’s epic adventure.

Tell @tombradby to stay away from me #DeflateGate

It is kind of pretty up here. The airplanes following me are still scaring me a little, though. #noradblimp #jlens #norad

@ABC @GMA Landed in bloomsburg right by my school. Knocked out the power at CMVT. pic.twitter.com/WLJydKVf2I

Update 10/28/2015; (4:00 PM EST) NORAD officials told WBAL-TV News in Baltimore, Maryland that the blimp was secured in an unpopulated area of Bloomsburg, Pennsylvania.