An airman assigned to Davis-Monthan Air Force Base is facing a misdemeanor charge of assault with injury after allegedly attacking... 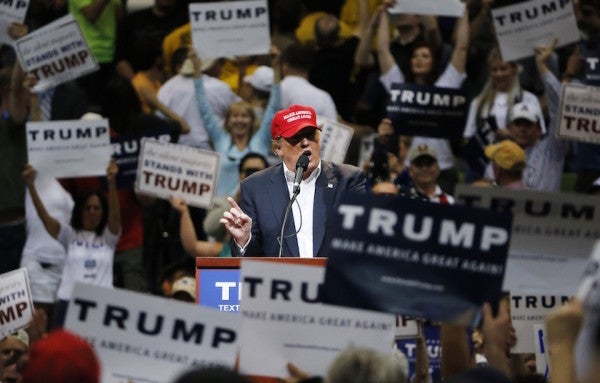 An airman assigned to Davis-Monthan Air Force Base is facing a misdemeanor charge of assault with injury after allegedly attacking a protester at a Donald Trump rally in Tucson, Arizona, on March 19, the Air Force Times has confirmed.

In a video taken by Tucson-based TV station KOLD News 13, Staff Sgt. Tony Pettway, 32, who is currently assigned to the 355th Security Force Squadron, can be seen punching and kicking the protester, identified as Bryan Sanders, as he is being escorted out of the Tucson Convention Center by law enforcement officers.

Pettway is a security forces airman who joined the Air Force in 2002, the Air Force Times reports. He was handcuffed by police officers and escorted out of the convention center immediately following the confrontation, and has since been released from custody, according to CNN.

Another video posted on Twitter, taken from only a few feet away, offers a more graphic view of the incident. In it, Sanders can be seen making his way up the stairs holding a sign above his head. As he nears the top of the stairs, the person identified as Pettway rips the sign from his hands and blindsides him with a left cross. He then unleashes a flurry of punches and kicks as Sanders crumples to the ground.

The Arizona Daily Star posted a video interview with Bryan Sanders following the fight, in which he explains that the sign he was carrying read, “Trump is bad for America.” After describing the rally as “fascism” and an “angry mob,” Sanders adds, “We’re going to stop this. This is not going to continue. If it takes somebody getting punched in the face, that’s what it takes. No problem.”

Related: The Problem With Donald Trump’s Plan For The Military »

Trump seems to be referring to an outfit worn by another person who appears in a white hood behind Sanders in the video. Prior to the assault, the GOP candidate can be heard calling for the hooded individual to be removed from the building, saying, “Get him out of here. There’s a disgusting guy, who puts a Ku Klux Klan hat on. He thinks he’s cute. He’s a disgusting guy.”

In an emailed statement to the Air Force Times, Capt. Casey Osborne, a spokesman for the 355th Fighter Wing, wrote of the incident:

“We are reviewing the situation, fully cooperating with local authorities, and will take appropriate action. All DoD members are authorized to participate in the political process in their personal capacity without implying any endorsement from the DoD. We believe wholeheartedly in our fellow Americans' rights to express their views on political issues, and we strongly condemn any attempt to silence those views through force or violence.”