Obama Is Taking A Page From Reagan In Dealing With Iran 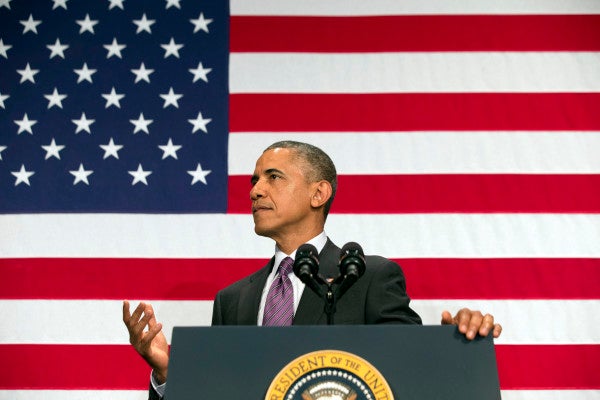 In December of 1981, just a month before President Ronald Reagan took office, an NBC/Associated Press public opinion survey found that 76% of Americans believed that nuclear war was “likely” within a few years, an increase from 57% just six months earlier. As a result of skilled diplomacy and unconventional thinking, the Reagan administration was not only able to avoid a nuclear conflict with the Soviet Union, but by the conclusion of his presidency, the two Cold War adversaries were well on the path to a peaceful, negotiated solution to the nuclear arms race.

The landmark Intermediate-Range Nuclear Forces Treaty signed by Reagan and then-Soviet Premier Mikhail Gorbachev in 1987 set the stage for the foundation of the Strategic Arms Reduction Treaty, which reduced nuclear stockpiles and delivery systems to levels that had been unthinkable only a few years before. Despite being an early opponent of nuclear arms negotiations with the Soviet Union, Reagan eventually facilitated a negotiated solution to the arms race. His use of tough, smart diplomacy mitigated the threat of nuclear war and defied the principle of mutually assured destruction.

Today, the world is faced with the advent of a new nuclear arms race in the Middle East. The development of Iran’s nuclear program has led to the troubling prospects of a new war in an already fragile and fractured region. For many U.S. allies, including Israel and Saudi Arabia, a nuclear-armed Iran is an existential threat much like that faced by the U.S. during the Cold War.

Recognizing that there are few means to counter this threat — diplomacy, armed conflict, or continued deterrence through the implementation of sanctions — the Obama administration has followed in the footsteps of the Reagan administration in negotiating a possible diplomatic resolution to the crisis. The reality of the current multilateral negotiations over Iran’s nuclear program is that once again, there is the quintessential possibility of settling the threat of war through the use of diplomacy and American leadership.

This issue is of particular concern to post-9/11 veterans. The invasion of Iraq was predicated upon the mistaken belief that the regime of Saddam Hussein was developing and proliferating weapons of mass destruction. Ultimately, the invasion resulted in 10 years of warfare and a heavy cost in blood and treasure. This is a history that we can ill afford to repeat. While we know that Iran is on the path to developing a nuclear weapon, a diplomatic solution can achieve the desired result of a permanent freeze of its capabilities while avoiding another costly conflict.

As the deadline for negotiating a nuclear deal approaches, there are two possibilities, both of which are “wins” for the United States and its allies. Either a deal will be negotiated that will end the threat of a nuclear-armed Iran, or Iran’s nuclear program will remain frozen for another six months while negotiations continue. Any outcome that delays the likelihood of armed conflict while providing for the real and permanent prevention of Iran’s development of nuclear weapons is a step in the right direction.

Last November, a first-step agreement was hammered out in which Iran agreed to freeze development of its nuclear program. This agreement has been followed by intensive negotiations with the ultimate goal of making the freeze permanent. Iran’s willingness to come to the negotiating table is itself a result of diplomatic efforts by the United States to build a coalition of nations committed to ending the Iranian nuclear threat peacefully.

Iran’s decision to negotiate has in part been the result of unprecedented sanctions that have had a real and damaging impact on the Iranian economy. Iran is also awakening to new political realities that have put pressure on Iranian leadership to settle the nuclear issue once and for all. The Assad regime in Syria, and Hezbollah in Lebanon — both traditional Iran allies — have been weakened by the relentless and bloody Syrian civil war. Iran’s allies in Baghdad also appear increasingly fragile, and with the seizing of significant portions of Iraq by Sunni Islamic insurgents, Iran is facing the real possibility of a hostile Sunni Islamic state on its western border.

The successful use of sanctions as a means of pressuring the Iranian regime is a victory for diplomacy, economic statecraft and working with our allies. Many members of Congress, by partnering with the president on this initiative, have shown that they can work effectively and in a bipartisan manner towards implementing a meaningful and effective foreign policy.

Opponents of the deal will argue that Iran cannot be trusted to uphold its end of the bargain. It is only by signing an agreement that the international community will be in a position to verify the status of Iran’s nuclear program. Without this agreement, the international community will be blind to Iran’s nuclear activities. This was a very real concern of Reagan’s during his negotiations with the Soviets, and like his agreement with Gorbachev, any final agreement will not be taken on blind faith.

As Reagan was fond of saying, the principle of “doveryai, no proveryai,” or “trust, but verify,” will be critical to confirming the permanent freezing of Iran’s nuclear program. In his spirit, it is time for Congress to fulfill its obligations to the United States and its allies by supporting a deal with Iran that permanently freezes any nuclear weapons program and avoids the real possibility of a costly and prolonged war. While the use of force should always be an option of last resort to prevent Iran’s acquisition of a nuclear weapon, Congress owes it to U.S. veterans who have already fought one war to avoid proliferation of WMDs in the Middle East and pursue a diplomatic solution.