The American Military Partner Association has filed a lawsuit against the Department of Veterans Affairs for failing to provide all... 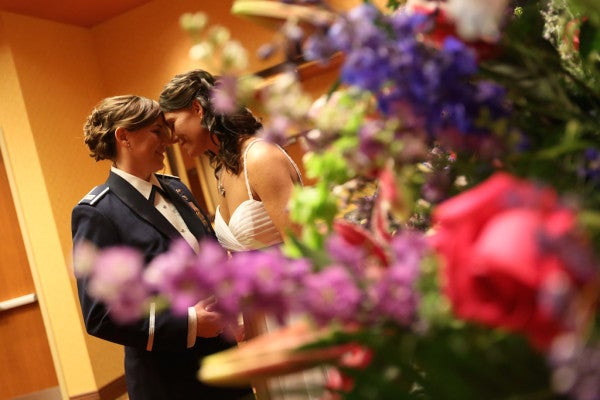 The American Military Partner Association has filed a lawsuit against the Department of Veterans Affairs for failing to provide all same-sex married couples with spousal benefits. The lawsuit was triggered after the Defense of Marriage Act ruling in which federal agencies were asked to review their policies on federal benefits to same-sex couples. After its review, the VA issued its statement in June, which found that despite the ruling, a couple must reside in a state that legally recognizes the marriage when they apply for benefits in order to be eligible. Attorney General Eric Holder filed a memo stating that congressional action was required to fix the problem, but it’s unlikely the issue can be solved with any sort of consensus in Congress; therefore, the American Military Partner Association went through with its lawsuit in order to compel the VA to change its policy.

VA policy is based on a portion of U.S. code called Title 38, which says a couple’s eligibility is based on their residency, a law that dates back to 1882, and is the standard for veterans’ benefits, according to the VA’s counsel, Will Gunn. Therefore, a gay couple who marries in New York, but moves to Nevada where gay marriage is not legal, will not be eligible to receive important spousal benefits. This goes against the Supreme Court ruling of United States vs. Windsor, which overturned the portion of the Defense of Marriage Act that defined marriage as between a man and a woman for the purpose of federal benefits, making denial of such benefits unconstitutional. Most federal agencies complied with this ruling and changed their policies; however, the VA did not.

With 19 states and the District of Columbia recognizing same-sex marriage, and 31 states still banning it, access to benefits for these veterans can be a hardship. This seems well behind the times as openly gay military members can now serve and a myriad of federal policies have been rewritten since the fall of the Defense of Marriage Act.

So, why can’t the VA catch up? The VA stated in June that its policies were based on U.S. federal law (Title 38) that while goes against the DOMA ruling, is still law and it has to abide by it. Most other agencies have adopted “place of celebration” policies that allow federal benefits to be given to those couples who were married in states where it is legal to do so. In these policies, their residency has no bearing on their eligibility.

Meanwhile veterans are going without important benefits such as ChampVA, which provides healthcare for spouses of disabled veterans, and disability benefits that increase with dependents. Last month in Idaho, a U.S. Navy veteran sued the state Division of Veterans Services in order to allow her to eventually be buried with her wife who had passed away from emphysema. The two were married in California, but the state of Idaho does not recognize their marriage; therefore, Idaho’s veterans cemetery denied her request. For now, the 74-year-old keeps her wife’s ashes unburied until it is legal for them to be buried together.

After the ruling by the federal circuit court, the losing side will have a chance to appeal to the Supreme Court on this matter. Meanwhile, the VA is not commenting on the lawsuit. But hopefully the case doesn’t need to extend for that long while vets and families wait for disability checks and the legal certification to be buried next to their loved ones. These veterans did not go to war for a particular state, but for the whole country, and some became disabled serving that country. It is therefore not only negligible but criminal to deny them federal benefits for their military service.