5 Life Lessons The Army Taught Me About Getting Ahead

For a lot of people, joining the Army means the first time they've ever had to wash their own laundry or mop... 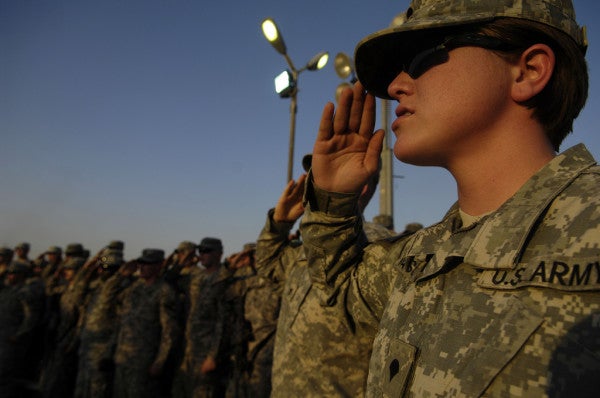 For a lot of people, joining the Army means the first time they've ever had to wash their own laundry or mop a floor. I remember hearing a female soldier in basic training ask where she was supposed to put the detergent in the dryer. However, throughout my time in the Army so far, I have learned a lot about who I am, how I work, and what it takes to get motivated.

The Army isn't just a place where soldiers learn warrior tasks and battle drills. It's where many of us learn to be an adult. The Army taught me to work with others, to be a leader, and the following very important lessons about life.

1. You won't get anywhere without a dash of endurance.

On countless occasions, I have been asked to do things that were challenging for me. Sometimes it was to beat my best two-mile run time, and other times, it was simply to stay awake in class after two hours of sleep. We are constantly called upon to do things that take exceptional endurance. If you can't make it through, you won't succeed. The only option is to keep your head up. You have to run faster, push harder, and most importantly, drink water.

I went to basic training in Fort Sill, Oklahoma, in late January when it was so windy that my cheeks were tinged with red from wind burn until graduation. When we ate meals out in the field, there was more dirt in the food than there was salt or pepper. I remember one particular instance where a slice of bread flew off my plate entirely. I was so hungry that I wasn't about to let it go to waste. I chased it down, wiped off most of the dirt, and then ate it anyway. I probably ate more dirt in that three-month period than I did food, and I don't seem to be any worse for wear.

3. There is more to family than blood.

There is nothing like the quick bonds that are created in the military. Being a part of the military is like having the biggest family in the world. I have couches across the country I can sleep on at any time if I need to. I have life-long friends that I will never forget. We support each other through anything and everything. The people I’ve met and connected with continue to play a huge role in who I am becoming. I can't even imagine where I would be today without my Army family.

This might sound a bit “hooah-hooah,” but honestly, it’s true. As a reservist, I have a civilian career. I worked prior to being in the Army and I wasn’t ever a bad employee, but learning to pay attention to detail has completely transformed my ability to complete a task the right way the first time. I stand out among my civilian peers because commands don’t simply go in one ear and out the other. I listen, I back brief, and I do the work that needs to be done properly the first time. It’s amazing how many fewer mistakes you make when you simply pay attention.

5. Your career is not out of your hands.

I learned the hard way that there is only one person who is responsible for me and my career — me. If I don't follow up on my leave forms or check to make sure that award I was up for was actually submitted, I might never get to where I want to be. If you put your career in someone else's hands, they just might drop it. I'm sure my leadership tires of me calling them up, but what happens to me matters. The Army is no small institution and things commonly get lost in the shuffle; learning to keep track of my records and ensuring that what I need done is, in fact, completed has been an invaluable part of my training as a soldier.

Most of the time, we learn things the hard way. I’ve had to make a lot of mistakes to figure out exactly how to persevere and make the most of my military career. If I learned anything at all from being a soldier, it’s that success comes to those who “embrace the suck” and learn something while they’re doing it.