UNSUNG HEROES: This Army Reservist Saved A Crowd From A Suicide Bomber

Something wasn’t right. The man was dressed as a doctor, but his face was unfamiliar and his behavior erratic. After... 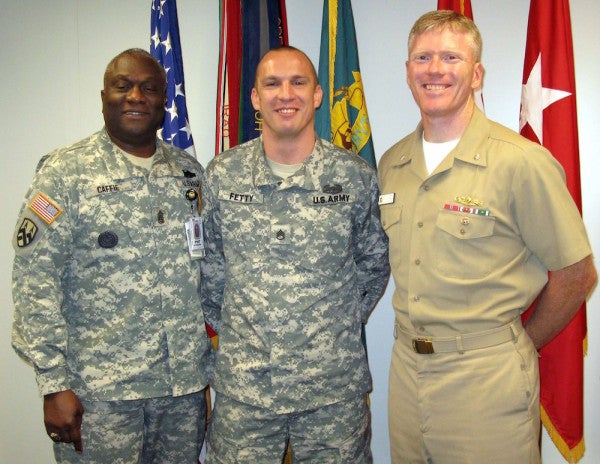 Something wasn’t right. The man was dressed as a doctor, but his face was unfamiliar and his behavior erratic.

After working for ten months with his provincial reconstruction team on the construction of a new emergency room at Khost City Hospital in Afghanistan, Staff Sgt. Jason Fetty was pretty sure he could recognize all the doctors who worked here. This man didn’t belong.

It was Feb. 20, 2007. Fetty, an Army reservist from West Virginia, was on guard duty for the emergency room’s grand opening. Scores of people had gathered for the ceremony, including the governor of Khost and a number of other dignitaries.

“Every soldier who has been in combat or been downrange knows when something is not right,” Fetty told Donna Miles of the American Forces Press Service. “You can feel it. You can see it. It's a general sinking feeling that things are not going to go right. You feel it in your gut.”

Several doctors were streaming out of the hospital. The stranger was in front. Fetty suspected the man was wearing a suicide vest under his lab coat.

“My immediate thought is that he’s a suicide bomber,” he told the WDAY news station. “It’s our biggest threat at a ceremony such as this. The Taliban wants to destabilize the government, and the more Afghan government officials they can kill, the more of a strategic victory for them it is.”

The man had paid scant attention to Fetty and seemed to be charting a course through the crowd. With complete disregard for his personal safety, Fetty approached the suspected suicide bomber.

“I had to keep his attention on me,” Fetty explained. “I confronted him with my rifle. I yelled to him, ‘Stop. Get down.’”

It worked. The phony doctor turned his focus to Fetty. He lunged for Fetty and grabbed the barrel of his rifle.

Calmly, Fetty maintained eye contact with the man and used his momentum to maneuver him behind a wall. Fetty figured there was a good chance he was going to be killed, but hoped he could save other lives by getting the man away from the crowd and the dignitaries.

“You resign yourself pretty quick,” he told Miles. “It was either going to be me or 20 other people back there. … Suicide bombers are next to impossible to stop. All you can do is limit the damage that they can do.”

Now Fetty was on the offensive. According to his Silver Star award citation, he tackled the man and struck him with the butt of his gun. The man pulled himself up. Fetty fired at the man’s feet, but he charged anyway. Fetty shot his lower legs and knees. Wounded, the man continued to come at him.

“He stood back up, even though I gave him a crippling wound,” Fetty told Miles. “He got back up and tried to come at me again.”

The ruckus got the attention of the other soldiers, and they fired at the man, too. Fetty shot again, hitting the man’s stomach.

Now the man’s face contorted into what Fetty described as “the scariest face I've ever seen.” Fetty knew what was coming next. “Earlier, he just looked crazy,” Fetty explained, “but now he wanted to kill me.”

“It became obvious to him that he wasn’t going to make it to his intended target, so he was just going to take me with him,” recounted Fetty in an ABC interview.

Fetty ran three steps and dove into the air. The explosion unleashed shrapnel into his face and the left side of his body. Several other soldiers and an Afghan security guard were also wounded in the blast.

But they survived. All that remained of the phony doctor was a big hole in the ground. The wall had protected the crowd from the blast.

“If he would have detonated in the beginning, there were 100 to 200 people in the crowd, and every single one of them stood the chance of being injured or killed,” Fetty told ABC.

Fetty is credited with saving countless lives that day, including the governor of Khost, who was considered the likely target of the attack.

For his actions on Feb. 20, 2007, Fetty received the Silver Star, the third highest award given for distinctive gallantry. Fetty was the first Army reservist to receive the award in connection with the conflict in Afghanistan.

Ultimately, the failed attack had broader strategic consequences, reported the American Forces Press Service. It sparked a public outcry and inspired a peace rally. Local mullahs distanced themselves from the bomber’s actions. Fetty’s bravery led to better relations between the U.S. government, the Afghan government, and the Afghan people.