Star Wars Episode IV: A New Hope was released 38 years ago this week. Most of us remember Star Wars,... 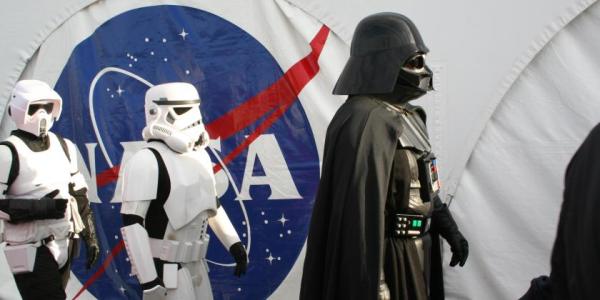 Star Wars Episode IV: A New Hope was released 38 years ago this week. Most of us remember Star Wars, its two sequels, and three prequels for its morality tales. But — intentionally or not — George Lucas gave us a glimpse into power politics, foreshadowing major events in the War on Terror. Here are just a few Star Wars themes which resonate with present-day, U.S. national security.

1. Never underestimate the will to fight.

In some of the earliest drafts of Star Wars, Lucas pitted a primitive race — originally, the Wookiees — against a technologically superior empire, a motif Lucas would eventually weave into the storyline for Return of the Jedi.

It’s also a theme we see throughout military history. Like many baby boomers, Lucas, who was once tapped to direct Apocalypse Now, was profoundly impacted by the Vietnam War. In that war, American and South Vietnamese forces, though technologically superior, failed to quell the Viet Cong insurgency, eventually leading to a massive invasion of South Vietnam from the North. In later years, Americans would claim the South Vietnamese simply lacked the will to fight, a point that rings all too true today.

What’s with these Jedi and Sith, anyway? Oh, sure, they say they believe in the same Force. But for thousands of years, they’ve been spilling blood over mindless philosophical differences. Apparently, there was a Great Schism some years ago; ever since then, the Jedi have been selecting their successors by the Jedi Council, while the Sith go by the Rule of Two.

It would be one thing if this sectarian violence were limited to just the Jedi and the Sith. Unfortunately, a few years ago, an extremist by the name of Luke Skywalker flew his X-Wing fighter into the most visible symbol of our beloved Empire, killing thousands of people in the greatest act of terrorism ever known. Worse yet, those Jedi would dare to build a temple within eyesight of this despicable act.

The Jedi may claim they’re the religion of knowledge, defense, and peace; but if you read Jedi literature, it’s filled with little more than gratuitous swordplay. I think it’s time our emperor finally admitted that the war against the rebellion is a war against Jedi extremism.

3. Don’t over rely on autonomous systems.

Droids are great, until they lose link. When that happens, even your most sophisticated droid Starfighter stumbles about the sky like a drunken Predator drone.

Satellite communications are a drone’s Achilles’ heel, and our enemies know it. That’s why they’ve invested in cyber warfare, GPS jamming, and anti-satellite missiles. Even an eight-year-old can figure out how to knock out a droid control ship and render an entire droid army useless.

According to the Great Prussian military theorist, Carl von Clausewitz, war consists of three factors: the rational aims of state policy, the irrational passions of the people, and the element of pure chance. For all of the emperor’s machinations, he was eventually undone by the latter two legs of the trinity—by sheer luck, Anakin Skywalker had a change of heart, and decided to side with his son instead of his master.

At the end of Return of the Jedi — the special edition, at least — we see celebrations on a dozen worlds following the death of the emperor. Dancing in the streets, if you will.

But as scores of follow-on novels show, removing a brutal dictator only leads to chaos, turmoil, and factional infighting. That puts the New Republic’s plans for democracy building on hold for a few years.