Editor’s Note: This article includes several possible spoilers. On Monday night, everyone struggled through the Giants’ collapse against the Eagles... 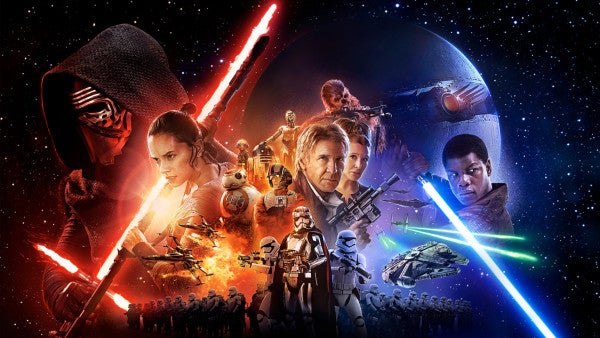 On Monday night, everyone struggled through the Giants’ collapse against the Eagles in order to watch the new “Star Wars: The Force Awakens” trailer, and it feels more classically Star Wars than the prequels ever did.

However, I’m still keeping my expectations at rock bottom — or at least trying to — and after watching this thing on a semi-loop, my general skepticism is shaky.

From the trailer’s onset, it feels familiar. We see Rey (played by Daisy Ridley), a young woman scavenging for parts from a desecrated Imperial ship, on a planet that, fitting with Star Wars tradition of being defined by one geographic feature, is just a desert. This planet is, apparently, not Tatooine — other reviews have identified it as Jakku, an isolated planet in the Outer Rim territories. When asked her identity, Rey’s response is “I’m no one.” I originally thought that Rey might be the daughter of Han and Leia, but on the other hand, she could be Luke’s daughter. She’s seen in the trailer tinkering with scraps and junk metal, and has the ball droid that perhaps she built. It would be in keeping with Skywalker tradition to ditch your kids on a desert planet and ensure they know nothing about their birth.

Next we see Finn (played John Boyega), who takes off his stormtrooper helmet while proclaiming he was “raised to do one thing” and “he’s got nothing to fight for.” It’s likely he’s in that TIE fighter that goes crashing down to the desert planet below, which is likely the same planet Rey’s on. My prediction is he gets kicked out of the Empire and now he’s stranded.

Cut to Kylo Ren (played Adam Driver) who has a sort of Vader-esque effect going on with his voice, and we see a shot of Vader’s melted skull and mask. It’s unclear if it’s actually in Kylo’s possession or you’re just meant to think that, since Luke Skywalker was the last one to have it before they sent him off Viking-style on Endor. But it seems odd that Luke would just leave that stuff lying around. You’d think Vader’s ashes would at least find a spot on Luke’s mantle, or the backseat of the X-Wing, or scattered among the burnt-out husk of Uncle Owen and Aunt Beru’s moisture farm.

In the next shot, Kylo covers a screaming Poe Dameron’s (played by Oscar Isaac) face and we see a forest getting all kinds of messed up by a laser, presumably shot out of the wannabe Death Star that’s seen in the top left of the new poster.

The Millennium Falcon flies around, all the while being chased by TIE fighters. This needs no real commentary, it’s just pure awesome to see the Falcon in 2015-era effects dogfighting like it never has before. That’s just flat out cool.

There’s a quick glimpse of Kylo Ren and his henchmen; they’re all wearing similar masks and leathery black armor, and there appears to be a big battle on this forest and lakes planet, between the Rebels and the First Order, the new faction of the Empire that we see in the trailers.

Han takes Finn and Rey to some sort of temple where perhaps the rebel base is located. Following there’s a brief shot of a guy with a robot hand and R2-D2, I think this can really only be Luke. This is also the only shot we’ve seen of him throughout the marketing campaign. He’s been completely absent.

The stormtroopers arrive on what looks to be that same desert planet, but it’s difficult to tell. They’re burning everything down and shooting stuff. Captain Phasma (played by Gwendoline Christie) appears to be leading these stormtroopers in a cape and shiny armor.

Rey’s crying on a snowy planet, while Han Solo, Chewie, and Finn do the old, “I surrender, oh wait, we’re cool” move on the earlier forest/lake planet where the all-out battle appeared to be happening.

There also looks to be a big battle on this snowy planet and a trench; I wonder if there’s an exhaust port at the end of the trench that’s the size of a womprat that you can easily nail in your T-16.

Lots of fighting and shooting ensue; there are continuations of some of the action scenes shown previously in the trailer.

There’s one shot of Leia as Han hugs her. We then see Finn and Kylo Ren facing off on the snowy planet. Finn has a blue lightsaber — I think it’s the lightsaber that Luke lost on Cloud City in Empire Strikes Back. Someone, that according to other sources is not Leia, implores Rey to “let the Force in” and that closes out the final trailer.

The Star Wars marketing team has done a great job of giving the fans something to look forward to without giving away any of the plot.

My predictions are that Finn and Kylo Ren were at one point bros or at least they hung around the same circles. Rey is Luke’s daughter. Kylo Ren knows this somehow, or something like that draws him to Jakku. Han Solo and Leia are aware of Rey’s existence, so Han swoops in to save her and Finn because of this. Han plays an Obi-Wan-esque role here, mentoring Finn and Rey. Luke is going to show up toward the end of the movie to train Finn and Rey to become Jedi and fight back against Kylo and his posse of what we can probably assume are Sith or the next best/worst thing. At least one original trilogy cast member will die. The fact that Han and Chewie are the only old cast members to be featured in any of the trailers or materials for the movie makes me put my money on one of them. I assume Han and Leia have kids, but I’m not sure if we’ve seen them yet. It seems a bit far-fetched for Rey to literally ask Han Solo if all the stuff that they did was real, if she’s his daughter, you’d think that would have come up in conversation at least once before. I think there will always be a Skywalker at the center of these movies, I think Finn’s arc will be similar to Solo’s where he goes from stormtrooper to Rebel hero/Jedi and Rey’s will follow Luke’s journey.

Watch the trailer for Star Wars: The Force Awakens below.