The Army Has Lost The Art Of Leadership

Editor’s Note: This article was originally published on Combat CombatCavScout’s personal blog. Ladies and gentlemen, I have come to a... 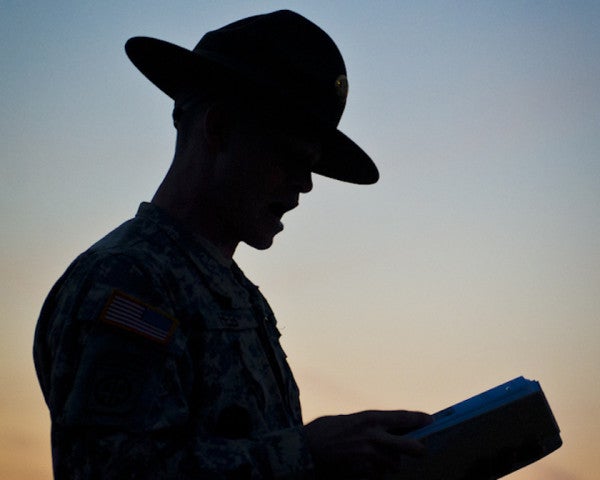 Ladies and gentlemen, I have come to a sad conclusion: As an Army, we have lost the art of leadership.

It’s something that has been boiling in the back of my head for a long time now, but I feel that it’s finally time for me to give up hope. You see, I heard something a few days ago that really struck me. I was in a meeting —- one of the ones we like to hold in the Army to talk about all the administrative things we should be doing, but aren’t, like soldier awards and evaluations and what not — and the sergeant major said something to the group of commanders and staff that made my ears perk up.

“How do you expect to lead these soldiers if you’re not doing things like getting your hair cut or going to PT?”

The unit command sergeant major — a man charged with taking care of hundreds of soldiers — just reduced the entire concept of leadership to a haircut and a PT score. I mean, that’s certainly part of it. You can’t ask soldiers to do things you’re not willing to do. But it’s only a part.

Of course, I readily dismissed his diatribe, because it’s something I hear all the time. It always irks me, but it’s an attitude I’ve come to expect, especially from senior leaders. And then, today, I realized that the biggest part of the problem was not that the sergeant major’s definition of leadership was derivative and lacking. It’s that we as Army leaders have grown to accept it.

You see, the “haircut” definition of leadership — the one harped on by nearly every command sergeant major I’ve ever known — is leader-centric. And as far as I’m concerned, that’s a problem. Leadership shouldn’t focus on what I can do about me. It should be focused on how well I take care of my soldiers. I can shave my head bald and score a 400 out of 300 on my PT test, but that doesn’t mean I can lead soldiers. If I can’t help them take care of their problems, if I can’t get them to believe in the mission, if I can’t get them to come together as a group to accomplish a task, then does it really matter how quickly I can run two miles? Or how short my hair is?

Related: No, the Army has lost the art of leadership »

We as leaders have come to believe that leadership is all about us, but it’s not. Leadership is about being a servant to those you lead. If a commander can run five miles in 30 minutes, but has to kick 15 soldiers out of the Army because they failed their Army physical fitness test, he or she has failed as a leader. You need to understand that the world doesn’t begin and end at your own personnel file. If you think a soldier is more likely to follow you because you have a high-and-tight haircut, rather than because you show that you’re willing and able to take care of those under your charge, you have lost your way.

At that very same meeting, the commanders reviewed the PT failures and overweight soldiers in their company. And when they announced the number of soldiers they were going to kick out because of these failings, several had a noticeable undertone of pride in their voices, as if they were happy to be doing what needed to be done to cleanse the Army of the ne’er-do-wells in their formations. Not a single one seemed ashamed that they were in the position of having to chapter out these young American men and women who had signed a contract to serve their country with the explicit understanding that those above them might ask them to lay down their lives in defense of their nation. If you’re a commander, and 10 different soldiers in your formation have failed their PT tests or become overweight, you need to understand that there is a good chance that the single common denominator in that equation is your command team.

A brief aside: I once knew an analyst who likely could have qualified for a Mensa membership. The guy could rattle off not only facts, but solid strategic-level analysis (you know, that thing we paid him for) about any country in Central Asia and put it in a white paper with a pretty ribbon on top that you could submit to any number of journals. The kid’s problem was that he was coming up a little short on his PT tests. He was an E-4 who the Army had spent probably millions of dollars to train, equip, feed, deploy, and pay for his four-year-long stint. And during his sole deployment, when his noncommissioned officer in charge wasn’t hobbled by a command team more concerned about haircuts than real leadership, he passed his PT test with room to spare. But once he got home, and had to attend regular unit PT, he soon began to fail again. He was placed in a “remedial PT program,” which included all of those soldiers who were physically broken in some way (and thus unable to actually train), told he wasn’t allowed to PT outside of remedial PT, and then swiftly booted from the service after he failed a second PT test.

This kid, who was amazing at his job, was given no leadership whatsoever. He was failed by the Army. And the Army failed itself. How many of our budget woes could we cure if we would just apply some real goddamned leadership to problems instead of taking the easy way out and kicking out soldiers whom we have already spent so much money on, just to turn around and spend more money on replacing them? I would pose this question to all potential commanders: If you bought a house, remodeled it, invested in it, and started shaping it into what you wanted it to be, would you turn around and sell it the first time the heater went out?

When I voiced concern about the way this soldier’s case was handled, I was told, “PT is an individual responsibility.” It was not the first time I have heard that, nor would it be the last. But it doesn’t matter how many times it’s said, it’s still bullshit. If PT was an individual responsibility, we wouldn’t form up at 0625 every morning and do it together. And if you try to sell unit PT as a way to “build unit cohesion and esprit de corps,” I will call bullshit again and challenge you to take a poll of how many soldiers actually enjoy standing in the freezing cold to go run in formation while they call the same old tired cadences they’ve been singing since basic training. Being in PT formation doesn’t make you happy, and it doesn’t make you a strong team. Being a strong team is what makes you happy to be in PT formation.

Additionally, if I accept that PT is an individual responsibility for a 19-year-old private first class, then I immediately demand that you stop inspecting his barracks room. Stop inspecting his vehicle before he goes on leave. Stop giving him safety briefings every Friday. Though I love soldiers, I will be the first to concede that you will not like the results of that particular experiment.

Stop enforcing a double standard. Either your soldiers are responsible adults able to care for themselves on an individual level, or they’re not. Don’t tell me he should be able to set up his own diet and exercise plan, but has to be checked to make sure he cleaned his room. You don’t get to be a leader only when it’s convenient.

Don’t get me wrong: I understand completely that there are soldiers who give up, who are beyond reaching. There’s no doubt that they exist, and sometimes we have to cut them rather than take precious resources away from those in our formations who want to succeed. But we as Army “leaders” have grown too comfortable choosing the easy wrong over the hard right, and blanket all those who present a challenge to us as examples of the former rather than entertain even the slightest possibility that they are the latter.

I don’t know why I seem to feel differently about this than so many of those around me. Maybe I’ve just lost all my blind hooah, but I have a hard time writing the words “Army leaders” without some kind of parenthetical disclaimer. I don’t know how we lost our way. The concepts of leadership that I learned in ROTC haven’t changed. You take care of your soldiers; you serve them. It’s pretty simple, but I feel like it’s beyond our grasp. And I don’t have an answer on how to get it back, to make the azimuth correction we so desperately need. All I know is that it breaks my heart every damn day.