It’s a debate that has consumed the American armed forces since Nov. 10, 1775, when Gen. George Washington looked at... 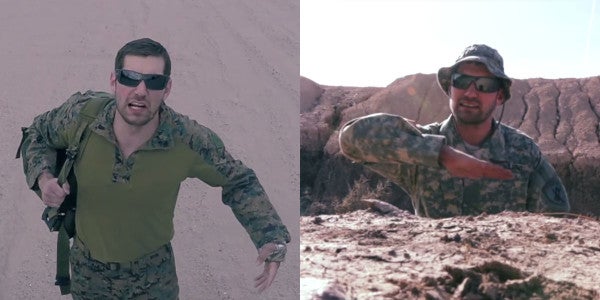 It’s a debate that has consumed the American armed forces since Nov. 10, 1775, when Gen. George Washington looked at the five-month-old United States Army and said, “Oh no, this just won’t do.”

Then the Marine Corps was born. It’s history, folks. Tun Tavern, look it up.

It’s an instant classic, probably his best rap battle yet [Ed. note: pun intended]. Best’s videos always depict the most stereotypically masculine and some of the most controversial aspects of military culture. Be it SEALs vs. Rangers or MARSOC vs. Green Berets, we’ve covered Best’s hilarious rap battles for more than a year, but this one was so good, even the Army Times couldn’t stay away.

The lines are instant classics:

Marines: I’ve got Chesty Puller and General Mattis. You’ve got relaxed PT standards and a bunch of fatasses.

Army: I’m the greatest force in the world, you must admit. You forget a haircut, everyone throws a fit.

I’d have a comeback to that Army line, but I have to go get my haircut.

Ultimately, soldiers and Marines can come together in consensus around at least one issue as they did in Best’s video — fuck ISIS.

Watch the NSFW video below: