span.bimvidTitle {display:none;} When 19-year-old Dustin Brown entered the public library in Morton, Illinois, on Oct. 13 screaming that he wanted... 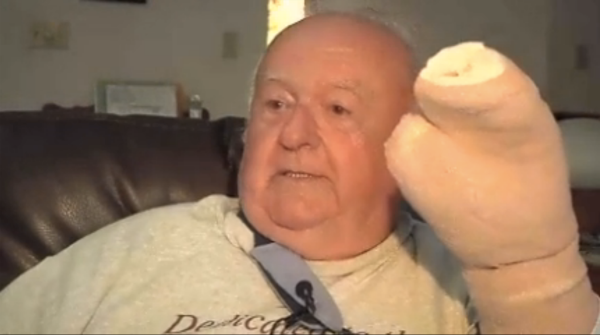 When 19-year-old Dustin Brown entered the public library in Morton, Illinois, on Oct. 13 screaming that he wanted to kill children, James Vernon knew immediately how to respond.

Vernon, a 75-year-old Army veteran who was coaching a chess club at the library, told Pekin Daily Times that Brown entered the building with two hunting knives, yelling, “I’m going to kill some people.” While the 16 children and four adults hid under the tables, Vernon stood up to stop Brown from getting closer.

“I tried to talk to him. I tried to settle him down,” Vernon told Pekin Daily Times. “I didn’t, but I did deflect his attention and calmed him a bit. I asked him if he was from Morton, did he go to high school. I asked what his problem was. He said his life sucks. That’s a quote.”

Vernon distracted Brown until he could alert the children to run out of the room.

Brown slashed at Vernon from the right, and Vernon blocked him with his left hand. “I should have hit his wrist. That’s how you’re trained, but it’s been half a century,” Vernon said. “First rule of combat: Be fast and vigorous,” said Vernon, though himself not a combat vet, according to the Times.

Vernon managed to grab Brown and pin him to the table and then hit him on the collarbone, causing him to drop the knife. While Brown had slashed two arteries and a tendon on Vernon’s left hand, the veteran was able to hold him in place until police arrived.

Brown, who was reportedly free on bond for child pornography charges, was charged with attempted murder, armed violence, aggravated battery to a person over age 60, and burglary.

Vernon is recovering at home after surgery for his injuries.

Vernon’s wife, Hanna, told a local NBC news channel, “He is that type of a person and that’s one of the reasons why I married him.”