DUNFORD: The US Has Years Of Work Left To Do In Afghanistan

On Dec. 8, Marine Corps Gen. Joseph Dunford returned to familiar ground when he visited Bagram Airfield in Afghanistan, this... 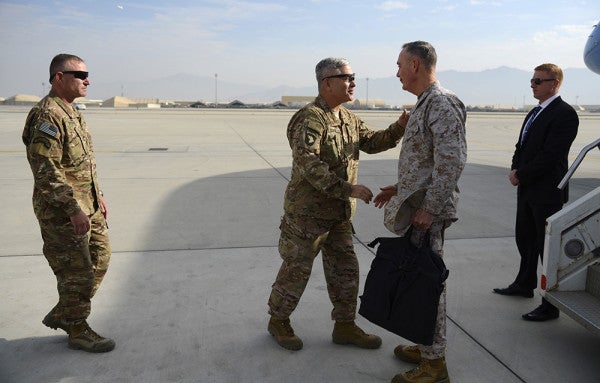 On Dec. 8, Marine Corps Gen. Joseph Dunford returned to familiar ground when he visited Bagram Airfield in Afghanistan, this time in a different role. It was Dunford’s first visit to the country in his capacity as chairman of the Joint Chiefs and comes just over a year after he last commanded the international forces there.

When he last departed in August 2014, the United States’ plan was to close its bases and pull out all but a small contingent of troops by 2015 that would provide embassy security. Now, roughly 10,000 American service members are spread across the country as the Afghan army attempts to push back an aggressive insurgency as violence continues unabated.

Gen. John Campbell, the current commander of international forces in Afghanistan, and Dunford spoke with Stars And Stripes concerning the impact the last 14 years of war, especially amid the rise of the Islamic State in eastern Afghanistan and the temporary loss of Kunduz to Taliban insurgents.

“There’s work to do, certainly, years to do it, certainly,” Dunford said. “But when you look at what’s happening over the last couple of years, there ought to be room to be encouraged because our goal was to stand up the Afghan forces and have them increasingly take responsibility for their own security.”