Seventy-one years ago this week, U.S. Army General George S. Patton, Jr. delivered what is considered one of the most... 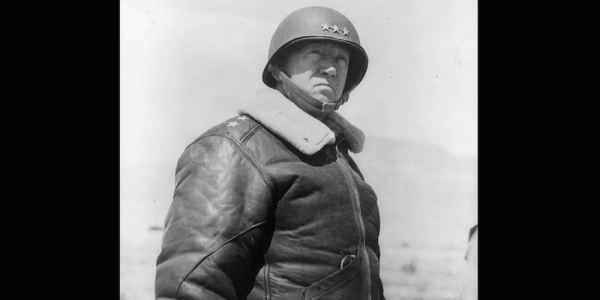 Seventy-one years ago this week, U.S. Army General George S. Patton, Jr. delivered what is considered one of the most rousing military speeches of all time to the American 3rd Army waiting to do battle in German-occupied France.

Patton actually recited the widely revered speech four to six times between late May and early June 1944, without consulting any notes, writes Terry Brighton in his book “Patton, Montgomery, Rommel: Masters of War.” The content of each of those speeches from one to the next was substantially, but not entirely, identical. Every time, Patton wore his helmet and polished cavalry boots, gripping a riding crop that he snapped occasionally for dramatic effect.

While some officers disapproved of the curse words and vulgar epithets sprinkled throughout the speech, the enlisted men loved it because Patton was speaking like them, in the “language of the barracks,” according to Brighton.

The most famous portion of the speech may be Patton’s opening statement: “Now I want you to remember that no bastard ever won a war by dying for his country. You won it by making the other poor dumb bastard die for his country.” Patton is believed to have said these lines in the version of the speech he delivered to the 3rd Army’s 6th Armored Division on May 31, 1944, but not in the June 5 version of his speech, according to Brenda Lovelace Gist in her book “Eloquently Speaking.”

There is no official transcript of Patton’s speech surviving today except for slightly varied versions scribbled by G.I. audience members as they listened to his oration. But, as historian Charles M. Province points out in Armchair General magazine, an official version of the speech briefly survived after the war. In 1951, New American Mercury Magazine published that version, which the editors said was obtained by a congressman who had visited Patton’s Czechoslovakia headquarters.

The publication of the speech led to so many reader requests for reprints that the magazine editors hired someone they called a “famous” actor, whose identity now is unknown, to record the original speech, as well as a modified recording with less offensive words.

Although the magazine’s editors did not legally need approval from Patton’s widow to distribute the recordings, they asked for her permission anyway. She was against distribution, based on the opinion that her late husband’s speech was intended only for the men who were about to fight and die alongside him. As a result, the editors reluctantly destroyed the recordings.

Today there is no single agreed-upon version of the speech among historians. The excerpts below are from Province’s compiled version based on evidence from magazine articles, newspaper accounts, film biographies, newsreels, and books. You can read the entire speech and Province’s narrative, sans the “die for his country” opening quote, here.

Patton started by celebrating the innate competitiveness that makes the American soldier exceptional.

When you, here, everyone of you, were kids, you all admired the champion marble player, the fastest runner, the toughest boxer, the big league ball players, and the All-American football players. Americans love a winner. Americans will not tolerate a loser. Americans despise cowards. Americans play to win all of the time. I wouldn’t give a hoot in hell for a man who lost and laughed. That’s why Americans have never lost nor will ever lose a war; for the very idea of losing is hateful to an American.

He told his men that their sense of duty should always prevail over their fear of death.

Death must not be feared. Death, in time, comes to all men. Yes, every man is scared in his first battle. If he says he’s not, he’s a liar. Some men are cowards but they fight the same as the brave men or they get the hell slammed out of them watching men fight who are just as scared as they are. The real hero is the man who fights even though he is scared. Some men get over their fright in a minute under fire. For some, it takes an hour. For some, it takes days. But a real man will never let his fear of death overpower his honor, his sense of duty to his country, and his innate manhood.

The general emphasized that every soldier has an indispensable role to play.

Every single man in this Army plays a vital role. Don’t ever let up. Don’t ever think that your job is unimportant. Every man has a job to do and he must do it. Every man is a vital link in the great chain. What if every truck driver suddenly decided that he didn’t like the whine of those shells overhead, turned yellow, and jumped headlong into a ditch? The cowardly bastard could say, “Hell, they won’t miss me, just one man in thousands”. But, what if every man thought that way? Where in the hell would we be now?

The gist of his message was made perfectly, and anatomically, clear — always be advancing.

I don’t want to get any messages saying, “I am holding my position.” We are not holding a Goddamned thing. Let the Germans do that. We are advancing constantly and we are not interested in holding onto anything, except the enemy’s balls. We are going to twist his balls and kick the living shit out of him all of the time. Our basic plan of operation is to advance and to keep on advancing regardless of whether we have to go over, under, or through the enemy.

He told the inexperienced ones that war is never pretty.

War is a bloody, killing business. You’ve got to spill their blood, or they will spill yours. Rip them up the belly. Shoot them in the guts. When shells are hitting all around you and you wipe the dirt off your face and realize that instead of dirt it’s the blood and guts of what once was your best friend beside you, you’ll know what to do!

He reminded them they were about to join him in one of history’s greatest endeavors.

You may be thankful that twenty years from now when you are sitting by the fireplace with your grandson on your knee and he asks you what you did in the great World War II, you WON’T have to cough, shift him to the other knee and say, “Well, your Granddaddy shoveled shit in Louisiana.” No, Sir, you can look him straight in the eye and say, “Son, your Granddaddy rode with the Great Third Army and a Son-of-a-Goddamned-Bitch named Georgie Patton!”