5 Times Failing Made Me A Better Company Grade Officer 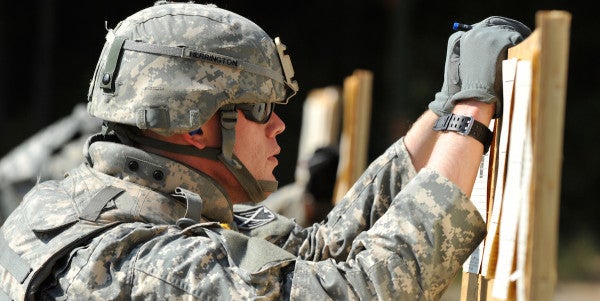 The Army likes to talk a lot about risks: risk mitigation, acceptable risk, risk aversion, risk management, etc. The thing is, as a junior officer, every day is just one big risk waiting to happen as you learn your job and how the Army works. With those risks comes failure. You will fail and people will notice it. If they did not tell you that at your commissioning source, I am truly sorry. Failure is a part of life, and, at some levels, you are expected to fail. The important thing is to use the experience to grow as both a person and a leader, rather than let it bog you down in thoughts of how maybe the Air Force would have been easier after all.

Both your leadership and your subordinates will take note of how you react to adversity, because you are always being observed. Even when you think you aren’t, you are. That whole thing about integrity being doing the right thing even when nobody's watching? Yeah, good luck with nobody watching; being a leader means being constantly evaluated.

In order to provide some context, I brushed off my book of shame to share some of my own failures in my brief tenure (four years) as a commissioned officer. I tend to dwell heavily on my own shortcomings, so compiling this list was alarmingly easy.

Coming from an infantry unit to a heavy construction engineer unit certainly had its own collection of learning points. For one thing, when they say “heavy,” they mean it — dozers, excavators, loaders, tractor-trailers, and rollers.

As a former enlisted light infantryman, I was awash in a sea of engineer toys. People kept mentioning a “hyex,” which sounded to me like some sort of pre-historic dinosaur (it is actually a hydraulic excavator). I had only recently taken over my platoon and was still trying to figure out what all the pieces of heavy equipment on my hand receipt were, when I received a surprise visit from a local police officer. He informed me that apparently I was responsible for damaging a telephone pole. For those unfamiliar with heavy construction equipment, it does not travel easily. It must be loaded on a heavy tractor-trailer setup that makes taking sharp turns a tricky endeavor. Two of my soldiers had been returning from a haul mission, and making a sharp turn, had reduced the width of a telephone pole by half.

This introduced me to two things: the importance of an active driver’s training program and the headache known as the Army Ground Accident Report. Luckily, the injured telephone pole — which was apparently not injured enough to be replaced — is on a corner that I regularly drive past. It is a daily reminder to me to enforce driver’s training standards and is a lesson in humility.

When I was in Afghanistan, a soldier in one of our subordinate companies had a negligent discharge in a dining facility. Amazingly, no one was hurt from this incident. The company commander kept the stray round in his pocket, as a permanent reminder that no matter how well trained you think your soldiers are, they can always be better. As leaders, we cannot slack up on training. Sure, it gets repetitive doing the same drills over and over again, but it pays off in the long run. Training and muscle memory reduce accidents.

It was 2011, and I was a proud butter bar, leading a platoon of engineers to assist the people of Vermont who had just been hit by Hurricane Irene. There I was, on the ground, helping Americans, just as I always imagined it. My platoon was clearing debris from a blocked-up river, running an incessant stream of dump trucks loaded with silt, logs, and stumps down the small road to a dump site. To get there, they had to cross over a bridge still in use by civilian traffic. And that’s when the mirror incident began.

The bridge was small, and when my dump trucks crossed, their mirrors stuck out into the oncoming lane of traffic. If an oncoming vehicle was a large truck, the driver’s side mirror was in danger of being smashed. This is exactly what happened. After the first one broke, the platoon had a good chat about safety, and we went back to work. Evidently I had learned nothing about the “control” piece of risk management. When the second mirror was broken, I received a visit from my company commander. I will never forget standing in a muddy field as my commander ripped me a new one. He stopped in the middle and said, “Lieutenant, I neither curse, smoke, or drink. But right now I feel like doing all of those.”

The rebuke stung, but I learned from it. I instructed all drivers to pull their mirrors in and placed road guards that stopped traffic at the bridge. Accidents ceased, and I learned that risk management is all about constant assessment and adjustment.

When the gold bar turns black, a certain amount of jaded cynicism comes with it. It is also accompanied by a false sense of security: You’ve been around, seen some things, know the ropes. This explains my failure to do a thorough route recon prior to leading a convoy back from an out-of-state training site to home station during our mobilization training.

When driving through rural Vermont, pretty much all towns look the same. This is what I kept telling myself as we rolled along, with the nagging suspicion in my head, as well as my noncommissioned officer’s radio transmissions, that we were not on the right road. My driver glanced over at me and asked, “Lieutenant, are we lost?”

We pulled off to the side of the road and did a map check. Yes, we were on the wrong road. My noncommissioned officers were admirable and refrained from piling on the “Can’t spell lost without L-T” jokes. The humiliation of arriving later than the other convoy elements even though we had started out first ensured that I have become obsessive about thorough route reconnaissance before any movement.

I had just been assigned as the assistant plans officer for our battalion in Afghanistan. With a heavy heart to be leaving my company and becoming a staff officer, I reported to the much-dreaded S-3 Operations tent. Was I concerned that I couldn’t write orders? Of course not, I had written plenty in Reserve Officers' Training Corps and Engineer Basic Officer Leader Course. I was a smart guy; Orders would be walk in the park. So I blasted through a quick fragmentary order and proudly presented it to my plans officer. He looked at it, looked at me, looked at it again, and then wordlessly presented me with the field manual for commander and staff organizations and operations and the battle staff handbook. The world of doctrinal terms, margins, spacing, fonts, and writing style opened up in a horrifying vista in front of me. I knew nothing, I realized. From then on, doctrine was my guide.

Was it painful? Yes. Often redundant and frustrating? Yes. Necessary for joint understanding? Hell yes. From that humbling experience, I learned that the application of doctrine should never be overlooked as an effective staff officer.

There’s nothing like a staff officer position to make you feel as though you are all knowing. This feeling is false. On a warm and dusty night in Afghanistan, I called our battalion commander to let him know that we had been ordered to send a detachment of engineers with their equipment to another forward operating base in Afghanistan. We had been given no mission for these troops, so I, in my all-knowing capacity, did not deem the movement to be urgent. Rather than send them with our own security team on a dangerous convoy, I advised sending the equipment via local national trucks and flying the troops into the base.

I presented the courses of action to the commander, and after a minute, he advised that it was his intent to send the troops and equipment with our security team to arrive at the base on time. With the burning conviction of a junior officer with little responsibility, I replied, “Sir, this is wrong.” His terse reply reiterating his intent and orders ended the conversation.

Leaving the tent, I stormed out into the darkness, hurling invectives to the night air. My plans officer was nearby and said, “Look. If anything happens to those guys, you don’t answer for it. The B-C does. All the responsibility is on him. You think he doesn’t feel the same as you?”

That’s when it hit me that the burden of command outweighed the emotional connection I had made with the mission. I could return to my hooch that night and relax with my friends; the commander could not. His view of the battlefield was entirely more comprehensive than mine. I had done my due diligence and should now shut up. The security team executed the mission on time, and all personnel and materiel made it safely to the other base. I learned that the responsibility of command is far more grave than my duty as a staff officer.

Adversity is common in life. We face choices and risks every day that can result in failure. The important thing is to always take away a lesson that will stick with you and give you a better perspective on your profession. Do not be afraid of failure, or you will never make a decision. Conversely, do not become complacent with failure and stop developing as a leader. Constant improvement must be our watchword. We are entrusted with the lives and well-being of American soldiers: do not let them down.