The member of SEAL Team Six claiming to have shot and killed Osama bin Laden in a daring night raid... 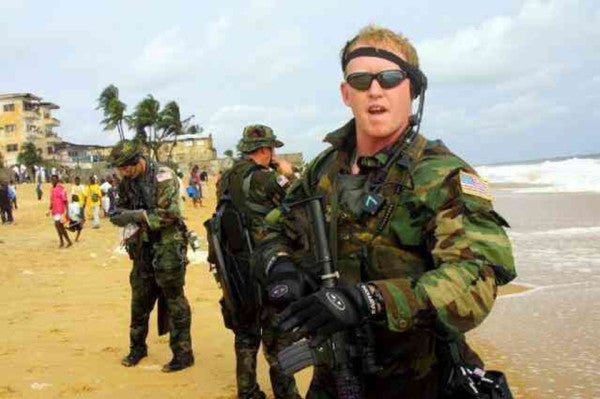 The member of SEAL Team Six claiming to have shot and killed Osama bin Laden in a daring night raid in May 2011 is Robert O’Neill, multiple news sources have confirmed. O’Neill has gone public through a Fox News interview slated to air Nov. 11 and 12, according to USA Today.

But this isn’t O’Neill’s first interaction with the press about his role on the raid. In 2013, Esquire Magazine ran a long-form piece called “The Shooter,” which shielded his identity. The piece detailed O’Neill’s distinguished 16-year career that culminated with him as a team leader on the famed SEAL Team Six, mounting the stairs at bin Laden’s compound in Abbottabad, Pakistan, with a round in the chamber of his weapon.

In the Esquire piece, O’Neill said that he joined the Navy SEALs all those years ago after a girl dumped him when he was 19.

“That's the reason al Qaeda has been decimated,” he joked in the piece, “because she broke my fucking heart.”

Though he may have been the man to pull the trigger, bin Laden is not dead because of Robert O’Neill. Bin Laden is dead as a result of a decade of tireless work from countless faceless members of the military, intelligence, and diplomatic communities. O’Neill is not solely responsible for killing bin Laden; rather, he is someone who fortuitously found himself at the end of a very long kill chain.

I want to clarify something before I go on — I do think Robert O’Neill is a hero. He’s a highly decorated 16-year veteran of the SEAL community with two Silver Stars, four Bronze Stars with valor, a Joint Service Commendation Medal with valor, and two Navy/Marine Corps Commendations with valor. When George Orwell wrote that “People sleep peaceably in their beds at night only because rough men stand ready to do violence on their behalf,” I believe he was talking about men like Robert O’Neill.

But he’s not the hero of the raid that killed bin Laden. Task & Purpose spoke with a member of the SEAL community under the condition of anonymity who said that SEALs and many in the special operations community are pissed that O’Neill is now stepping up to claim the spotlight.

In going public, O’Neill joins fellow Team Sixer Matt Bissonnette who wrote an unauthorized best-selling book about the raid called “No Easy Day,” under a fake name. The book was so rife with classified information that the Pentagon successfully sued Bissonnette and seized much of his profits.

With O’Neill and Bissonnette, “We have two guys trying to be the hero of something that was such a team effort,” the source told Task & Purpose. “That’s what’s rubbing a lot of SEALs the wrong way.”

There seem to be two compelling narratives of extraordinary heroism among the special operations forces in Abbottabad that day, and O’Neill’s isn’t one of them.

The first details the pilots with the Army’s 160th Special Operations Aviation Regiment who flew the specially outfitted Blackhawk helicopters used on the raid, one of which lost thrust hovering above the compound in the moments before insertion. By many accounts, that helicopter should have crashed disastrously, but the pilot managed to hard-land the bird in a way that saved everyone on board and kept the mission going.

“What they did to put that helo down was remarkable,” the source said.

The second story of heroism surrounds the point man on the raid: The unnamed SEAL who led the stack up the stairs, a stack of SEALs that likely included O’Neill and Bissonnette.

When the SEALs made it to the second floor in bin Laden’s compound, a man poked his head out. The point man suspected it was Khalid bin Laden, the al Qaeda leader’s son.

“[The point man] literally whispers, not amped up, not yelling, not anything. He whispers, ‘Hey, Khalid. Khalid.’ He whispers Khalid's name. Doesn't know if it's Khalid or not. Khalid literally looks back around the edge of the hall. And he shoots him,” Bissonnette told 60 Minutes in a 2012 interview.

The team proceed up the stairs where bin Laden was. Sources tell Task & Purpose that the point man fired shots at bin Laden when he peeked his head out. It’s unknown if the point man hit bin Laden, and if those shots killed him. The point man proceeded through the door, where he easily could have finished the job, but instead, he grabbed the two women in the room and pushed them against the wall, covering their bodies with his own in case they were wearing explosive vests, which was a big concern for SEALs on the raid.

This narrative is backed up by CNN’s National Security Analyst Peter Bergen, who has written extensively about the raid. In a Nov. 4 story on CNN.com, Bergen references an anonymous SEAL Team Six member on the raid, writing that “the ‘point man’ ran up the stairs to the top floor and shot bin Laden in the head when he saw what looked like bin Laden poking his head out of his bedroom door. The shot gravely wounded al Qaeda's leader.”

But it’s O’Neill — who almost certainly was not the most heroic man on the raid, and may not have even fired the shots that killed bin Laden — who now stands to garner all the credit.

“You have this point man, one of the real heroes of this thing, keeping quiet, being humble, and setting a good example,” Task & Purpose’s source said.

The top SEALs in Naval Special Warfare Command, Rear Adm. Brian Losey and Force Master Chief Michael Magaraci even went as far as to write a letter to the entire command about not seeking fame or fortune as a result of their duties.

“A critical tenant of our ethos is ‘I do not advertise the nature of my work, nor seek recognition for my actions,’” the two leaders wrote in the letter, which was widely seen as a condemnation of O’Neill and Bissonnette. “Our ethos is a life-long commitment and obligation, both in and out of the service. Violators of our ethos are neither teammates in good standing, nor teammates who represent Naval Special Warfare.”