10 Advances In Medical Technology From The Global War On Terror

War often serves as a catalyst for change and innovation. Nowhere is this more true than in the medical field.... 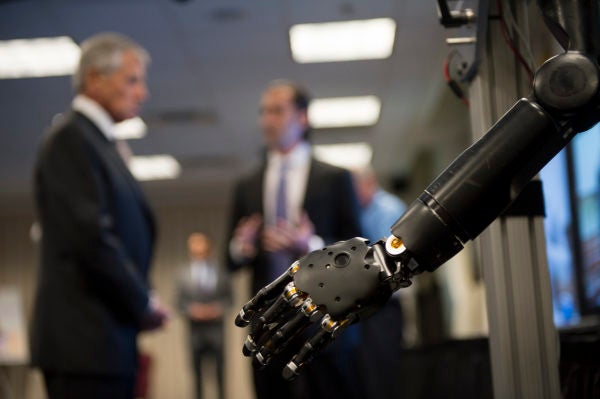 War often serves as a catalyst for change and innovation. Nowhere is this more true than in the medical field.

In June 2013, Assistant Secretary of Defense for Health Affairs Dr. Jonathan Woodson told the Defense Health Agency, “If war is the dark side of humanity, then military medicine is the light.”

Operations Enduring Freedom and Iraqi Freedom have prompted advancements in battlefield medicine as well as developments in preventative medicine and treatment programs. As more than a decade at war comes to an end, medical advancements have had an unprecedented impact on military and civilian populations.

Related: This Marine vet is the first recipient of a revolutionary prosthetic hand »

Here’s a look at 10 advances in medical technology and equipment that came out of the wars in Iraq and Afghanistan.

Tourniquets: Used by the U.S. military since the Civil War, tourniquets play an important part in constricting the flow of traumatic bleeding. According to an Army Medical Command fact sheet, nearly 50% of combat deaths since World War II can be attributed to blood loss.

In 2002, the war in Afghanistan prompted the invention of the one-handed tourniquet, which allowed soldiers to apply pressure to bleeds without assistance, but it was only effective on wounds on arms and legs. Three years later, the Combat Application Tourniquet became the primary tourniquet issued to all Army soldiers. Because of its ease of use, the CAT earned its place as one of the Army’s 10 greatest inventions in 2005 and has been incorporated into civilian trauma care.

Battlefield dressing: The past 12 years have seen numerous improvements to blood-clotting dressing with the development of the fibrin bandage, chitosan bandage and combat gauze.

Developed through the 1990s and unveiled in 2002 by the U.S. Army Medical Research and Materiel Command and the American Red Cross, the fibrin bandage clots proteins in the blood with fibrinogen, a glycoprotein, and thrombin, an enzyme. The bandage reduces blood loss by 50 to 85%, according to MEDCOM.

That same year, the Oregon Medical Laser Center developed the chitosan bandage, which stanches bleeds by combining a biodegradable carbohydrate found in the shells of shrimp and lobsters with blood cells.

Bonus: In February, researchers from RevMedx announced the invention of XStat, a pocket-sized injector that inserts up to 92 medical sponges into a wound and can halt bleeding within 15 seconds.

Pain management: In 2006, pain management advancements included a lozenge containing analgesic that provided pain relief, but did not sedate the patient. That same year officials at the U.S. Army Medical Department Center approved an advanced regional anesthesia, which blocks nerves in the affected areas for patients requiring surgery.

Prosthetics: According the U.S. Department of Veterans Affairs, 6% of service members wounded in Iraq experienced amputation. Advancements in prosthetics include the developments of robotic prosthetics and vacuum-assisted suction sockets for hip disarticulation. According to a MEDCOM fact sheet, more than 250 service members with amputation returned to active duty and more than 50 deployed again.

A Department of Defense-sponsored study, which began in 2012, involved the use of hyperbaric oxygen therapy, which exposes patients to pure oxygen, increasing the amount of oxygen red blood cells and body tissue absorbed, which, in theory, can change the way the body heals.

Vaccine development: Since the 1960s, the U.S. military has played a role in the development of eight licensed vaccines including Rubella, Hepatitis B and Hepatitis A. In 2011, the military adopted the Adenovirus vaccine, types 4 and 7, to prevent acute respiratory disease caused by adenovirus. Because the virus can thrive in barrack-type environments, the illness often results in lost training time. The vaccine gained approval in 2011 by the FDA after testing and evaluation of the new vaccine was completed at Army and Navy basic training command.

HIV research: Perhaps the most surprising medical advancement of the past decade is the development of a combination vaccine that resulted in the first ever success in preventing HIV infection with a 31% efficacy rate. The vaccine was named one of the best medical discoveries and one of the top 10 inventions of 2009 by Time Magazine.