Behold! A Vintage Woobie Jacket From The Vietnam War

Even back in ‘Nam, the beloved poncho liner was a favorite among troops — or at least among one. To... 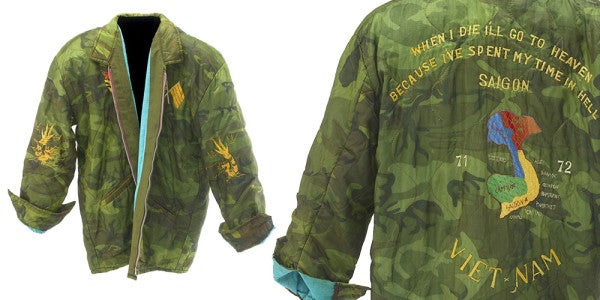 Even back in ‘Nam, the beloved poncho liner was a favorite among troops — or at least among one.

To whoever made this: Thank you for your service.Smithsonian Museum Of American History

Yes, that’s a fine looking woobie jacket, from the sewn dragons, belligerence oozing from the text on the back, to the powder blue lining. It’s a shame we don’t know more about its history. What we do know is that the National Museum Of American History acquired the jacket this year, according to Miranda Summers Lowe, a curator with the Division of Armed Forces History at the Smithsonian.

Much like the origin of the term woobie, little is known about how this vintage tacticool jacket came to be, just that it exists and it’s amazing. However, we can speculate on a few things.

By my powers of deduction, I’m pretty sure whoever made or commissioned this jacket spent some time in Saigon…Smithsonian Museum Of American History

It was likely made, commissioned, or purchased by a service member who was deployed to Vietnam between 1971 and 1972, and if I were a betting man, I’d say Saigon — if for no other reason than that this text reads like a love letter from a grunt to the shit:

When I die I’ll go to heaven because I’ve spent my time in hell.

Originally issued to U.S. Marines and soldiers in Vietnam as part of a set — a wet weather poncho for the rain, and a liner for the cold nights — it was the poncho liner “that would steal troops’ hearts,” as Angry Staff Officer previously noted for Task & Purpose.

Made from recycled parachute material, soft as all hell, durable, and camouflaged — so it’s tactical and comfy — it’s not a stretch to imagine some salty short timer deciding: “fuck this issued jacket, I’m going commando, the woobie way,” or something along those lines. After all, our phantom Saigon stylist isn’t the first to look at a woobie and speculate on how to improve upon perfection.

With the way tacticool garments and mil-spec civilian gear are flying off the shelves, it’s odd that clothing outlets continue to hawk the military’s most despised gear — from combat boot inspired kicks to glow belts. Yet we still haven’t seen the military’s most beloved issued item on the shelves at major civilian retailers. Can you say woobie hand towel? Woobie watch cap? Woobie winter coat? Woobie undies?

Oh no. What have I done?