In honor of its 90th anniversary, The New Yorker has removed the paywall for a 1944 article in which A.J.... 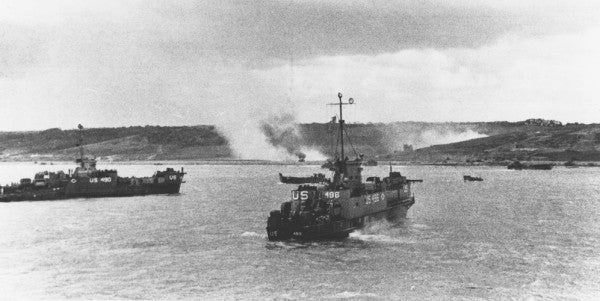 In honor of its 90th anniversary, The New Yorker has removed the paywall for a 1944 article in which A.J. Liebling reports from a crowded LCIL, short for Landing Craft, Infantry, Large, waiting to shove off toward the Normandy coast for the D-Day invasion. The author observes and interacts with sailors and soldiers of varying rank and backgrounds as they prepare for the invasion and fight boredom with paper-cover, armed-services editions of books, canned food, and poker.

Liebling preserves the regional accents of his subjects when transcribing their colorful quotes, so readers can hear their distinctive voices as they gripe about steep gangplanks, crack jokes, and trade rumors. Among the assortment of uniformed personalities Liebling speaks with is a Coast Guard coxswain, charged with being the first man off the landing craft to stretch a guideline for disembarking infantry. “I asked the boy what he was going to wear when he went into the water with the line and he said just swimming trunks and a tin hat,” Liebling wrote. “He said he was a fair swimmer.”