UNSUNG HEROES: The Soldier And His Sons Who Saved A Teenage Car Accident Victim 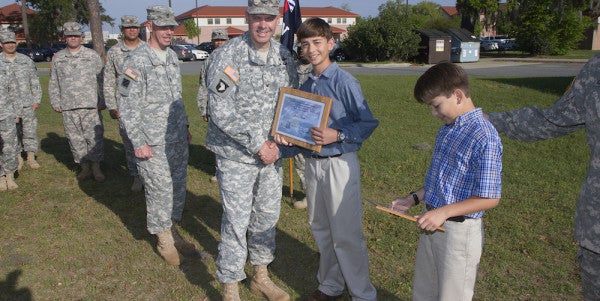 Army Chief Warrant Officer 4 Mike Carman was driving in Atlanta, Georgia, on Feb. 14 with his two sons, 13-year-old Miguel and 10-year-old Enrique, when they witnessed a devastating car accident. A teenage girl not wearing a seatbelt had been ejected from a car and was lying on the ground unresponsive, bleeding profusely, according to an Army press release.

Seeing that the victim’s father and sister, also at the scene, were panicking and unable to help the girl, Carman sprang into action with his sons in tow. Resorting to the combat lifesaver training he received in the Army, Carman checked the victim’s ABCs — airway, bleeding, and circulation.

Then the first order went down the chain of command. “At first, I didn’t know what to do,” Enrique said in the Army release. “Then my brother Miguel told me to get the first aid kit, so I did and handed it to my dad.”

Miguel, meanwhile, dialed 911 as his father talked him through what to say to the operator. “I just listened to my dad’s orders, because it was obvious he knew what he was doing,” Miguel said. “I’m just glad we could help out.”

The father and his two sons had traveled to Atlanta so the boys could compete in a soccer tournament, but they ended up helping to save a helpless teenager’s life in the middle of a busy commercial area. In the process, Enrique learned the importance of taking responsibility when others aren’t willing to, in order to help those who can’t help themselves. “There were a lot of people just standing around doing nothing, and I didn’t think that was right,” he said in the Army release. “I think the lesson I learned was don’t just stand around, take action.”

In their father’s eyes, it was an action befitting any honorable U.S. Army soldier. “Anybody wearing this uniform would do the exact same thing,” Carman said. “To see two young men get involved in a situation and provide aid to someone who is in desperate need of it while a lot of folks just stood there watching says a lot about their character. I could not be more proud.”

The boys and their father, an aviation mission survivability officer with the 3rd Combat Aviation Brigade at Hunter Army Airfield in Savannah, Georgia, were presented with certificates of achievement in an April 9 ceremony by the brigade’s commander, Col. John D. Kline.