The Heartbreaking Story Behind The Dustoff 7-3 Rescues In Afghanistan

Editor’s Note: This is an excerpt from Blackhawk helicopter pilot Erik Sabiston’s new book “Dustoff 7-3,” which is the true... 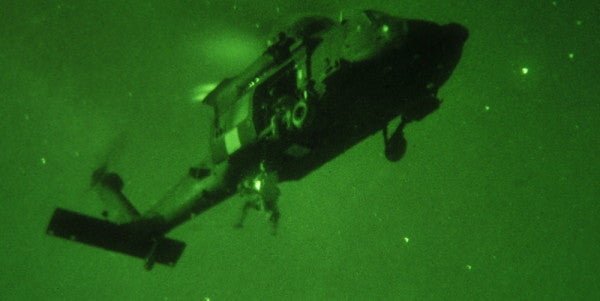 Editor’s Note: This is an excerpt from Blackhawk helicopter pilot Erik Sabiston’s new book “Dustoff 7-3,” which is the true story of the medevac crew sent to evacuate the wounded during Operation Hammer Down in Afghanistan’s Watapur Valley. The crew rescued 14 soldiers over three days.

In the back of Dustoff 2-6, Staff Sergeant Craig did what he could to prepare for a mission that was a mystery, and would remain that way until they arrived over the battlefield. He mentally reviewed all his training, all the possible protocols and interventions he might have to perform on this op.

It was probably going to be a hoist given the terrain in the area where the wounded were waiting, and he hated doing hoist missions at night. Getting a wounded soldier off the ground and into the medevac aircraft by hoist meant he would have to climb onto a hook dangling outside a machine that always seemed to be thrashing itself to pieces as the pilots fought to hold a steady hover. How many more of these will I have to do, he wondered. How many more can I do?

As many as I need to do, he reassured himself as he stared down into the darkness at the rugged terrain flowing below the Blackhawk, because no matter how scared I am, there’s a wounded guy on the ground that’s twice as scared. And I’m all he’s got.

The flight seemed to take forever and it was all boring routine until the crew chief made his move toward the back of the cabin. The pilots had contact with the requesting unit on the ground and it was time for the show to start. “We’re two minutes out,” the pilot said over the intercom and Heathe unbuckled to begin final checks. He made sure the crew chief’s monkey strap that linked to the back of his survival vest and kept him from falling out of the aircraft was secure. If they caught a gust of unexpected wind or had to maneuver hard to avoid ground fire, that strap was all the crew chief had to keep him connected with the aircraft. The crew chief returned the favor by checking Heathe’s gear and then reported they were set for the pick-up.

“Roger,” the co-pilot said. “We’re slowing up now—got them in sight.”

Read about Sgt. Julia Bringloe, who was part of author Erik Sabiston's crew and received the Distinguished Flying Cross for three days of hoists in June 2011 that she conducted all with a broken leg. >>

The crew chief announced that he was opening the cargo door and then pulled the right side door back to keep it from slamming shut when Heathe was suspended outside on the hoist. He reached for the hoist’s hand control and then sat on the vibrating metal floor with his legs dangling in the night air. The hoist swung out into position for a descent and Heathe straddled a three-prong hook called a jungle penetrator or JP that he would ride to the ground, carrying a collapsible litter that looked like a big olive-drab Tootsie Roll covered with straps to secure a patient during the lift.

Perched on the JP and exposed to the cool night air, Heathe sat motionless as the slipstream blasted his face. He could see nothing on the ground as the Blackhawk slowed. The nose pitched up like a motorcycle doing a wheelie as the pilots bled off airspeed. Heathe felt the hoist line swinging toward the tail rotor as the crew chief began to drop him into the night. He could see the ground now and had a panoramic view of the Kunar Valley.

The crew chief had the same view, but he was focused on getting his flight medic safely on the ground—pressing the descent button on his hand control, he kept a hand encased in a thick welder’s glove on the JP cable, feeling for any snags or snarls. They were over the proposed pick-up site now, and the pilots pulled Dustoff 2-6 into a hover, causing the entire aircraft to shudder as the men in the cockpit fought to hold it steady.

With his feet outstretched and body leaned back to minimize spinning or oscillations, Heathe dropped into the shadows while the crew chief reported his progress to the pilots.

In the aircraft cockpit over Heathe’s head, the pilot-in-command was fighting the night winds that were blowing down across the valley from the high ground and trying to maintain a point of view that would help him hold a hover in position over the pick-up site. He scanned the starry sky in a steady pattern through his NVGs, looking for visual cues that would help him keep the aircraft in exactly the same spot while the medic on the surface got his patients evaluated and hooked up for the lift. With Heathe safely on the ground, the crew chief reeled the hoist line back up to keep it from blowing into a tree or snagging some other vertical obstruction while they waited for Heathe to signal he was ready to send up the patients.

On the mountain, Heathe was reassuring the soldiers that their wounded were in good hands. “Hey, don’t worry,” he told the circle of grunts helping him with the patients. “I’m gonna get these guys out of here.” They loaded the first wounded man on the collapsible stretcher and Heathe grabbed a nearby soldier to assist him with the lift. It all worked better if one of the grunts controlled the length of rope—called a tag line—to keep the stretcher and the medic from spinning on the way up to the aircraft. “Just keep a little tension on the line,” Heathe told the soldier, “so we don’t spin. The hoist will do the rest.”

Heathe clipped into the cable ring, checked on the wounded man, and signaled for the crew chief to start lifting. He talked calmly to the wounded soldier as they rode the hoist and was happy to see the man’s relieved sighs in response. He was safe now, as good as out of it, and that was the best medicine in a situation like this. As they disappeared into the night sky, the wounded man’s buddies shouted reassurances to Bradbury.

“Take care of yourself. We’ll see you soon, Brian.”

Heathe and Bradbury were rising steadily toward the hovering Blackhawk as the crew chief reported their progress to the pilots. “Hover looks good. Medic and patient are thirty feet below the cabin, twenty feet…wait!” There was a loud snap, sharp and distinct despite the roar of the engines and the chop of the rotors. It sounded like a bullwhip cracking and it echoed through the helicopter’s cabin.

“I lost him!” The crew chief leaned out of the aircraft holding onto a short length of frayed steel hoist cable, staring into the dark below his perch. “CRAIG!” he screamed as Heathe and the wounded man plummeted to the ground a hundred feet below the Blackhawk. The soldiers on the ground scattered when they heard the snap of the hoist line and now they were all rushing toward the two limp forms lying silently on the rocks. The Taliban had nothing to do with it—but they were now going to have to deal with two other fallen heroes.