The History Of Video Games And The Military

Today, some of the most popular video games involve military-inspired imagery and gameplay. The juggernaut first person-shooter series Call of... 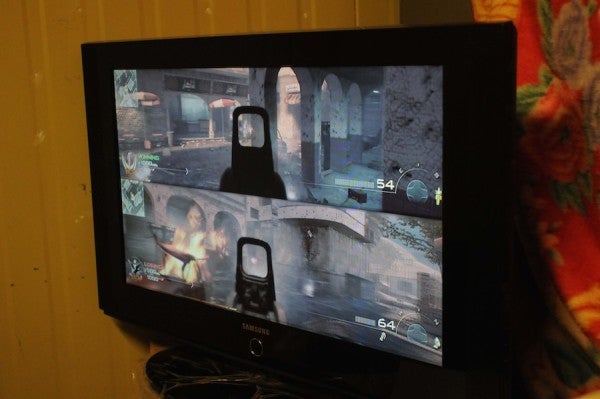 Today, some of the most popular video games involve military-inspired imagery and gameplay. The juggernaut first person-shooter series Call of Duty has sold almost 200 million copies as of July 2014. A look at the game database of Giant Bomb reveals nearly 1,000 titles with a “modern military” setting. But the relationship between the commercial games industry and the American military establishment goes deeper than simple inspiration.

The U.S. military’s first involvement with any type of electronic gaming was more of a happy accident than anything else. During the 1950s, Brookhaven National Laboratory had several early computers, designed to crunch the numbers on ballistic missile trajectories. In an attempt to garner interest from bored visitors to the lab, an enterprising physicist named William Higinbotham took one of these computers, hooked it up to oscilloscope, and created a small physics-based game dubbed Tennis For Two. Though the game had no real involvement from any military organization, the computer technology pioneered by the Department of Defense in the wake of World War II played a crucial role in bringing the game to life.

Thirty years later, the military was getting directly involved. One the first links between a commercial game company and a military agency occurred during the arcade game frenzy of the early 1980s. One of the more popular games at the time was Atari’s Battlezone, a tank game with eerie green wireframe graphics. The Army Training Doctrine and Command, aka TRADOC, wanted Atari to turn its sci-fi shooter into a training simulator for the Army’s latest infantry fighting vehicle, the M2 Bradley. Two Army Battlezone prototypes were eventually produced, but no Bradley crewman ever trained on the system. Still, it was an early signifier of how the mainstream games industry and the military would collaborate in the future.

The 3 best shooter, strategy games, according to a veteran »

Another step came over a decade later. In 1993, a small developer from Texas, Id Software, released Doom. The game pioneered the first-person-shooter genre that continues to dominate the industry. The Marine Corps took note of the growing influence of games, and how it could be a cost-effective supplement to training. Ever frugal, the Corps charged it’s Modeling and Simulation Management Office with finding a commercial product that could be modified for Marine training needs. Lt. Scott Barnett was assigned to play PC games on the market that might fit the bill, and eventually selected Doom II. Barnett enlisted the help of Sgt. Dan Snyder to modify the game from its sci-fi Mars terrain to small desert village, and replace the game’s demon enemies with more real-world adversaries.

The resulting product — while nowhere near realistic — was intense and engaging, and promoted the kind of consistent, repetitive teamwork a Marine fireteam would employ in combat. While “Marine Doom” never became an official training tool, Marines were encouraged to play it, and it was sanctioned to be installed on government PCs. In 1997, Gen. Charles C. Krulak, who was the commandant of the Marine Corps at the time, issued a directive supporting the use of PC games for “Military Thinking And Decision Exercises.” The stage was set for the Marine Corps and other branches of the military to work hand in hand with game developers.

The Corps developed a fire team training tool with Destineer Studios, who would later commercially release it in 2005 under the name Close Combat: First to Fight. The Army partnered with console game developer Pandemic Studios, to develop Full Spectrum Warrior, its own squad-based training game, released in 2004. That game spawned a commercial-only sequel.

Arguably the highest profile and most controversial, military game project is America’s Army. Initially released in 2002, the title was not a training implement, but a recruiting tool. The game, available for free download or on disc at Army recruitment offices, was an online multiplayer, first-person shooter game that had players assuming the role of different infantry-related jobs in the Army. Financed and developed by the Army, the game rivaled many of its commercial contemporizes in terms of quality. The game was also designed to reinforce Army values and training; players had to complete a virtual boot camp and marksmanship test before jumping online, and specialized roles like medic or sniper were locked behind further tiers of training. The game was also notable in that players only could play as the U.S. Army; the enemy team always appeared as a generic “opposing force” faction. America’s Army quickly became the subject of criticism for targeting teenagers in its recruiting strategy; the game aimed to get high schoolers thinking about a career in the Army long before they turned 18. This controversy did not impact the game’s massive popularity, and the project has continued, receiving 41 updates as of January 2014.

The military’s use of games continues unabated; whether for training, recruitment, or more recently, the treatment of post-traumatic stress disorder. As budgets tighten, games have become an attractive supplement to expensive field training. And as gaming moves into mainstream culture, the military faces the challenge of enticing a new generation of players to serve and fight.