It’s time to talk about an uncomfortable truth. I, like many of you, traveled the world while I served in... 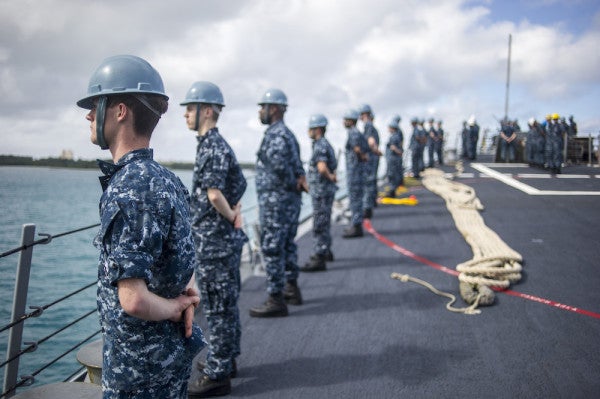 One instance stands out to me. In the Navy, when you’re visiting a port, someone in command leadership must brief sailors on the ins and outs of the port, including restricted areas. Without fail, these briefs contain a message about how sailors and Marines are not to participate in human trafficking of any kind, including prostitution or other sex industry practices.

There we were, off the coast of Saipan, receiving our port brief from the command master chief. He made a big show of decrying human trafficking, reminding the crew of our annual training. Yet several hours later, he was spotted by many sailors walking around town with multiple local women on his arm — and it was no secret that he had paid for their services.

This is the problem. The Pentagon seemingly recognizes that military indulgence in human trafficking is an issue, but when we get down to the unit level, commanders and their surrogates just don’t care. During my 12 years in the Navy, it was very clear that many of the sailors aboard ship created a demand for the services rendered through human trafficking. What was also clear was that no one would be charged or prosecuted for these crimes. My first ship even saw a captain who routinely paid for sexual “work” overseas.

What message does this behavior, our behavior, send? To the crew, it says that laws are more akin to suggestions. To civilians, it says that the military does not care to combat human trafficking. To women, it says they are nothing but goods to be bought and sold, treated like sub-humans; it’s no wonder we have such a culture problem in the military with regard to serving with women.

January is Human Trafficking Awareness Month. The Junior League of San Diego organization recently hosted a rally to raise awareness, and at one point, a brave young woman took the stage to tell her story. She told the crowd about answering a modeling ad and being promptly raped when she came in for her “interview.” She later learned that her rape was videotaped and distributed as pornography. She courageously walked us through her struggles, which have culminated in a piece of art meant to shed light on the young men and women affected by this issue.

There are myriad heartbreaking stories like the one described above. As survivors tell them, people become increasingly, and more visibly, uncomfortable. But being uncomfortable to hear such horrific tales is an essential response; we must turn that discomfort into action. Human trafficking affects not just undocumented immigrants and the poorest among us. Victims are our sons and daughters. Our nieces and nephews. Our brothers and sisters. And, yes, our mothers and fathers.

The lack of meaningful enforcement within the military is a slap in the face to the American people. We are charged with protecting all Americans. When we create demand for humans to be forced into modern-day slavery, we are doing quite the opposite. To be clear, I am not saying that the Department of Defense encourages this behavior. I would, however, argue that the issue is not taken seriously enough, especially at the unit level. When sailors and Marines engage in this behavior on deployments, they all too often bring it home and contribute to the domestic sex trafficking economy.

Everyone agrees that human trafficking is terrible, so what can we do about it? Let’s make 2015 the year that the DoD comes off the map as a consumer of human trafficking. Service members must be cognizant that paying for humans is deplorable and illegal. Leadership needs to set the example. As a culture, we must agree to hold ourselves to a high standard of conduct, and those who don’t should be punished.