An Air Force veteran credited his quick reaction to his military training after he shot and killed an armed robber who pistol-whipped him and stole money from the cash register of the Bay Point, California convenience store where he was working 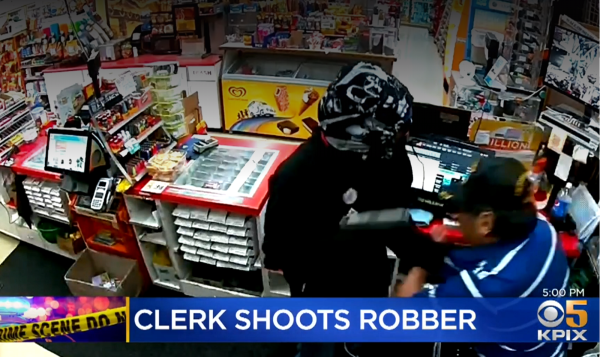 An Air Force veteran credited his quick reaction to his military training after he shot and killed an armed robber who pistol-whipped him and stole money from the cash register of the Bay Point, California convenience store where he was working.

The robbery occurred Sunday night at Kam's Market in the small East Bay town. According to CBS San Francsisco, Air Force veteran, Mark Kasprowicz, 56, was working that night when two masked individuals entered the convenience store just as he was preparing to close up shop.

Video of the robbery shows one of the suspects jump over the counter, and pistol whip Kasprowicz, forcing him to the ground. While that suspect emptied the register, the other assailant went to the back of the store and held the manager up at gunpoint, according to a local Fox News affiliate.

As the first robber empties the register, Kasprowicz can be seen reaching for a side drawer next to the register, where he pulls out a handgun. As he does, the masked gunman behind the counter strikes the cashier again before sprinting out of the store, his accomplice in tow.

During the encounter, Kasprowicz fired a single shot which hit one of the suspects.

According to CBS, which first broke the story, the suspect made it a block from the store before collapsing to the ground, where he died. The other suspect is still at large.

Kasprowicz was taken to the hospital after the incident, where doctors needed 12 staples to close the wound on his head. He told CBS that he opened fire after he heard one of the suspects shoot at him.

“By instinct, I just raised the weapon up and fired one shot,” Kasprowicz, who also works as a private security guard, told the outlet. “At this point I'm just thankful that I'm alive and that my coworker is alive.”

The Contra Costa County Sheriff's office is taking lead on the investigation, and no arrests have been made, according to CBS News.

While a spokesman for the the sheriff's department could not be reached for comment by Task & Purpose, CBS News cited their legal expert, Paul Henderson, as saying that the shooting will likely be deemed an act of self defense.

“Now the key thing in this case, is was the individual in imminent danger or were others in imminent danger?” Henderson said. “So to me I think an argument can be made that the danger had not ended for the clerk, or the public or for the employees who were in the store.”