Someone tell the 1st Sgt. 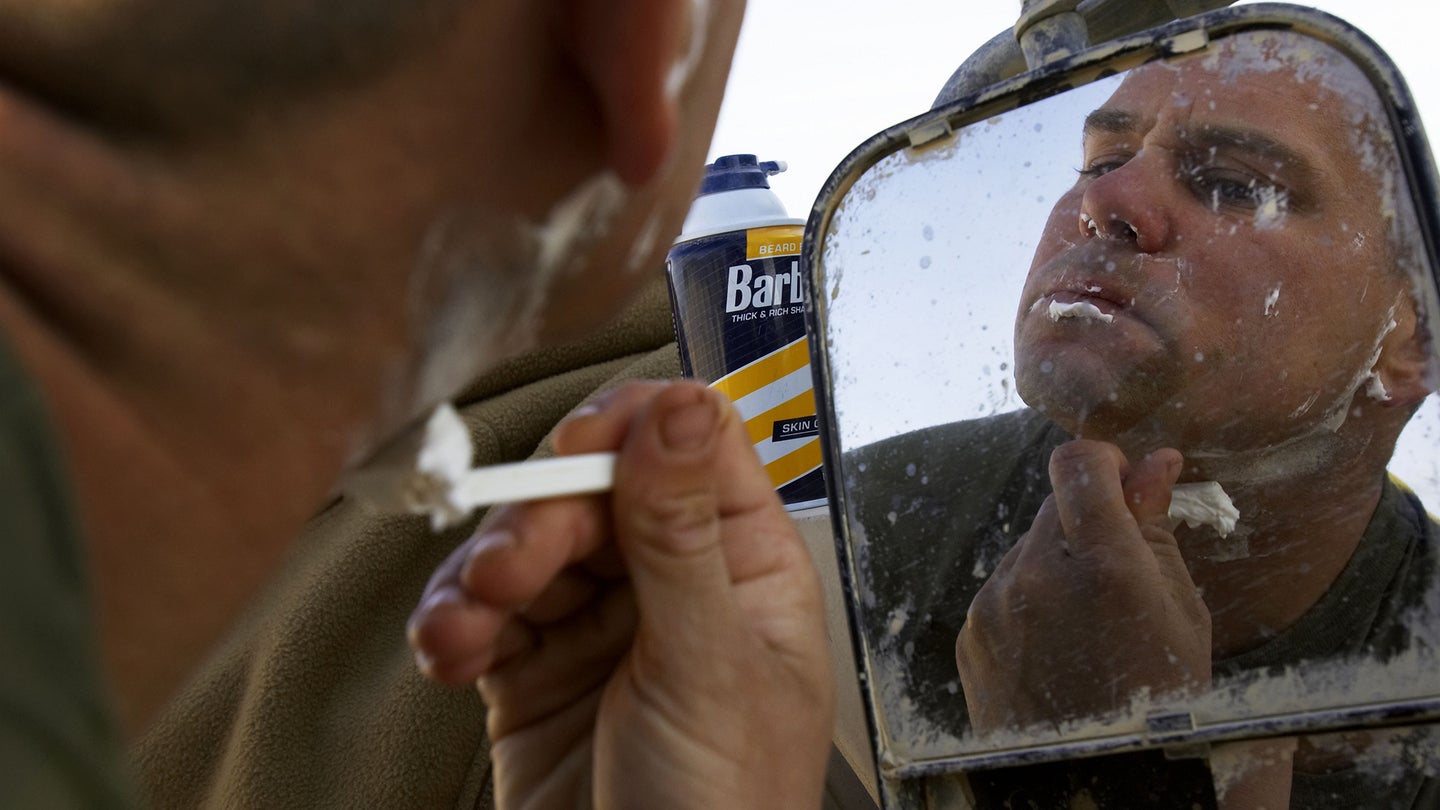 A Marine shaves in the mirror of a humvee at a patrol base called Iwo Jima in the town of Saadah, Iraq, eight miles from Syria, Saturday, Nov. 26, 2005. (AP Photo/Jacob Silberberg).
SHARE

Starting on Jan. 31, Marines with a painful condition where facial hair curves back into the skin and causes inflammation will no longer be punished for not shaving.

The move applies to Marines diagnosed with pseudofolliculitis barbae, also known as “razor bumps,” a chronic condition that is a common problem in up to 60% of Black men, according to the American Osteopathic College of Dermatology. Shaving exacerbates the problem by sharpening the facial hair that grows back into the skin.

“A 100% effective treatment is to let the beard grow,” the college’s website says. “Once the hairs get to be a certain length they will not grow back into the skin. For most cases, totally avoid shaving for 3 to 4 weeks until all lesions have subsided, while applying a mild prescription cortisone cream to the involved skin each morning.”

On Friday, the Marine Corps announced that it will cease taking administrative and other disciplinary action against Marines suffering from razor bumps or if they cannot shave for medical reasons.

“No Marine shall receive a 6105 counseling due to a diagnosis of a PFB [pseudofolliculitis barbae] condition or treatment for PFB,” according to Marine Corps Administrative Message 019/22. “No Marine shall be processed for administrative separation, separated from the Marine Corps, or denied reenlistment due to a PFB condition and/or for placement in a temporary or permanent ‘no shave’ status.”

The message goes on to note that razor bumps are “no longer a condition that is separable for the convenience of the government or any other basis for separation.”

The new policy does not affect Marines who have already been involuntarily separated for having razor bumps or for those who will be by Jan. 31.

Another change is that medical officers rather than commanders will have the authority to issue temporary and permanent “no shave” chits to Marines diagnosed with razor bumps that cannot be treated by topical medications, the MARADMIN says.

Additionally, Marines who are diagnosed with razor bumps will not have to keep a copy of their medical waiver or shave chit with them at all times as proof of their condition.

The Marine Corps’ about face on razor bumps is part of Commandant Gen. David Berger’s talent management plan, which also calls for retaining more first-term Marines and raises the possibility that “exceptionally talented Americans” with advanced skills in cyber, artificial intelligence, and robotics fields could bypass bootcamp to serve as Marines.

These changes suggest that the Marine Corps is becoming more accommodating about facial hair than the Navy, which banned no-shave chits in October 2019. The Marine Corps’ sister sea service decided that sailors need to be clean-shaven to wear the face mask for their firefighting gear.

“Some would argue that I moved too fast with that decision and that some are disadvantaged by it,” Chief of Naval Operations Adm. Michael Gilday said in October 2020. “But quite frankly, in my mind, the key thing is the safety of people out there in a situation like a fire, right. And can they wear gas masks that are going to seal properly?”