The U.S. Navy Blue Angels flight demonstration team arguably pulled off one of its most impressive feats yet over a... 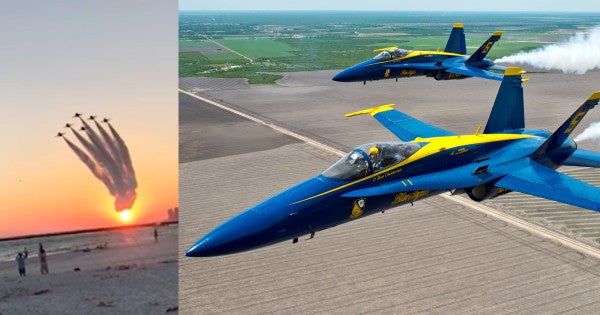 The U.S. Navy Blue Angels flight demonstration team arguably pulled off one of its most impressive feats yet over a beach in Alabama on Sunday.

In a video shot in Baldwin County, six of the team's jets can be seen flying over the beach in formation after they flew out of the setting sun. Dude.

The video went insanely viral on Facebook, racking up more than 80,000 shares and 3.7 million views so far.

Navy Chief Mass Communication Specialist Chad Pritt confirmed the video was indeed the Blue Angels, though he couldn't say for sure whether the flight happened on Sunday, “but it's likely,” he said.

“When time and fuel allow, we like to fly along the Gulf coast beaches on our way home from a show site to show our appreciation to the communities in the area that support us,” Pritt said.